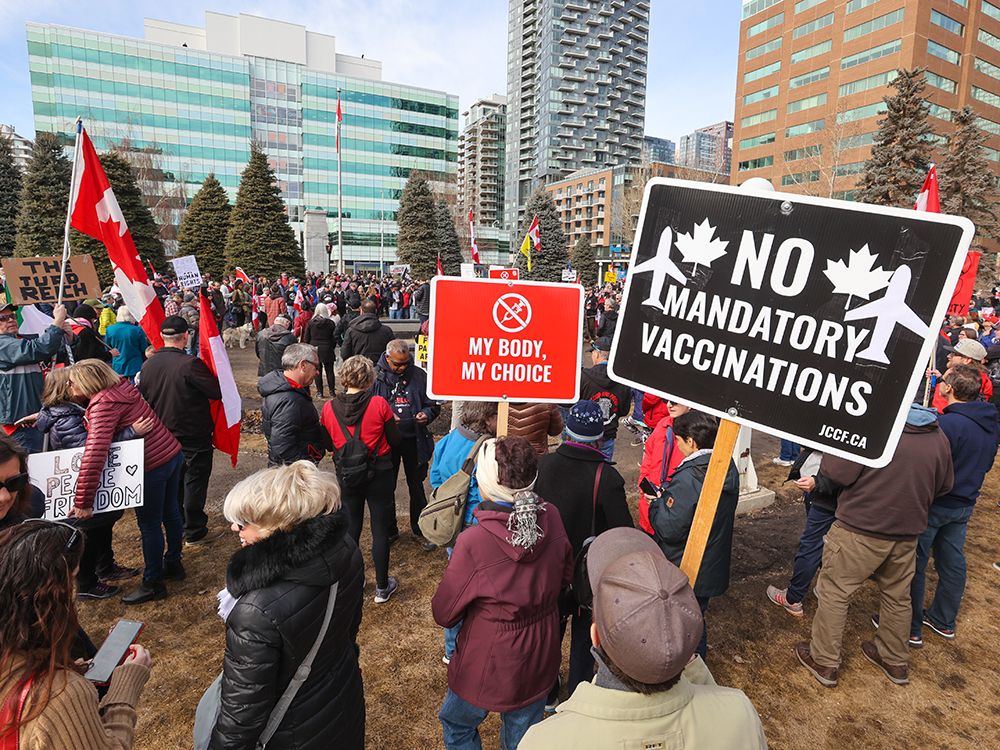 Calgary police stepped up enforcement efforts in response to the so-called freedom protests in the city’s central areas Saturday.

Officers arrested six people during the day for various offences, including breach of an injunction related to the ongoing demonstrations, as well as assaulting a police officer, said Calgary chief Mark Neufeld.

Five people were arrested at Central Memorial Park for breach of the court order, including one person who faces an additional charge for assaulting a police officer. Another person involved in the protests was arrested on outstanding warrants.

Ten traffic tickets were issued under the Traffic Safety Act and one decorated semi-truck was taken off the road outside city hall.

Calgary police have established an investigative team to determine if additional charges are needed, Neufeld said.

“We know we have more work to do, but we certainly want you to have full trust and confidence in the Calgary Police Service and our members,” Neufeld said. “These efforts will continue as we work together to bring peace back to the Beltline and surrounding communities.”

After the rally ended, protesters marched from city hall down Stephen Avenue before arriving back at Central Memorial Park. As more people arrived, police used their bikes to push protesters to the edge of the park and onto public sidewalks.

Protesters yelled “you’re on the wrong side” and “you’ll see us next week” to officers as they continued to advance. Six officers forcibly restrained and arrested one man near the centre of the park. Another man who refused to move from a park bench was arrested for obstruction.

Some freedom protesters and a small group of counter-protesters remained once the park was cleared, dispersing around 5 p.m.

The court injunction granted to the city on Friday prevents protesters from blocking traffic, operating vendor stands without a permit at parks, excessive horn honking or using an amplification system in a park without prior permission.

Curtis Makky stood across the street from city hall, watching as protesters rallied outside the municipal building. Makky said he is against vaccine mandates as he lost his job over his company’s policy, and is now struggling to find new employment.

“(Companies) are still requiring new employees to get vaccinated or to show that proof of vaccination in order to get the job. And it doesn’t make a lot of sense considering that they’ve claimed all the restrictions have been lifted.”

When asked about the impacts the protests have had on Beltline businesses and residents, Makky said everyone’s lives have been affected by the COVID-19 health measures.

“What about people who’ve lost their jobs, their businesses, their dreams, their livelihoods? That’s two years of that.”

Around 100 counter-protesters gathered at the Lougheed House earlier that day. Hunter Yaworski, spokesperson for Community Solidarity YYC, said he wanted enforcement to happen sooner but felt optimistic about police response.

“We’re standing with the community as we have done before, and hopefully the police will do what they said they were going to do,” Yaworski said.

Calgary-Buffalo NDP MLA Joe Ceci, whose riding includes the areas affected by the demonstrations, said he felt the court injunction granted to the city was a good first step, but the province should also step in.

“I’ve also asked the province to step up and support the city with their own injunction to give more weight to the potential legal enforcement of contraventions and bylaw infractions.”

Both city council and the police commission have said they received hundreds of emails and phone calls from Calgarians about the protests in recent weeks.

The letter to the police commission from Mayor Jyoti Gondek laid out some of those concerns.

“The level of noise from protester’s vehicle horns and chanting is negatively impacting quality of life,” she wrote.

Gondek noted residents, many of whom live in one- or two-bedroom condos or apartments, have been leaving the area to avoid feeling trapped in their homes on Saturday afternoons. Others have reported being harassed for wearing masks.

Businesses have reported lost income as customers flee the area before the protests begin.

Dan Murray, who owns I Love You Coffee Shop in the Beltline, said the protests started about 18 months ago and grew to thousands of people after the so-called Freedom Convoy made its way to Ottawa.

“It got really crazy when the trucker stuff happened,” he said.

The demonstration at Parliament Hill took over downtown Ottawa for about three weeks and ended after Prime Minister Justin Trudeau invoked the federal Emergencies Act. More than 100 people were charged with various offences between Feb. 17 and 18.

Murray said he and other residents also expected the Saturday protests in Calgary to end at that time but it’s just “gotten worse and worse.”

Peter Oliver, president of the Beltline Neighbourhoods Association, said the protest has turned into a “real toxic mix” that includes white supremacists and other extremists.

“We have a serious problem here,” he said earlier this week.

— With files from The Canadian Press