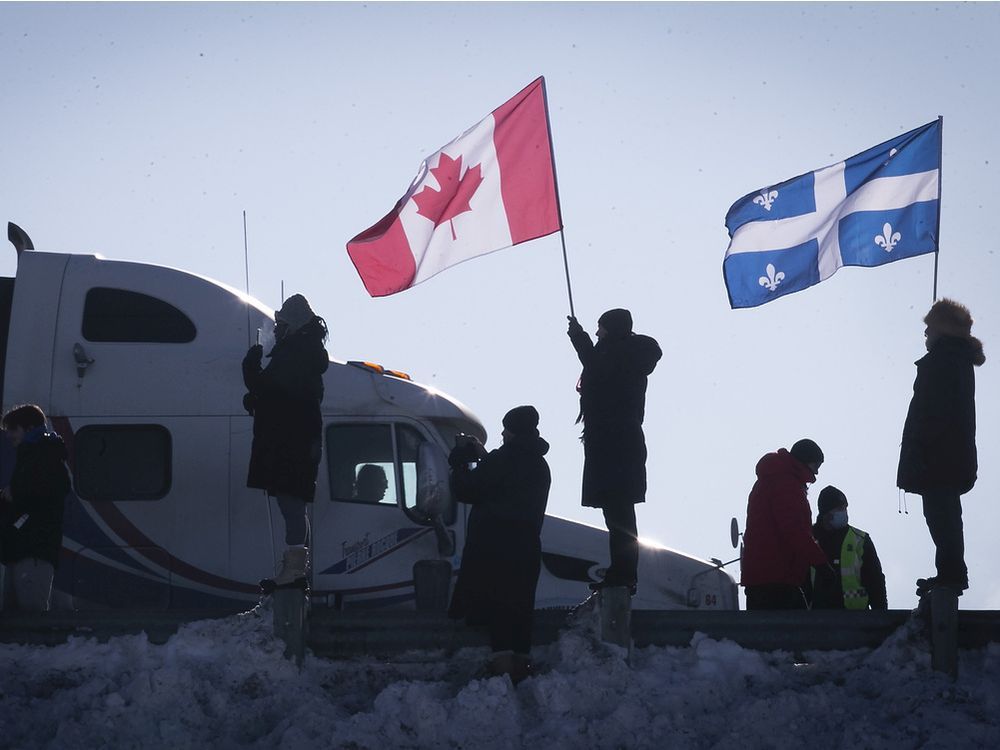 While the possibility on Tuesday was nothing more than a series of rumours and online comments, the Sûreté du Québec said it will remain vigilant and be ready should anyone try and stage a local version of the Ottawa trucker’s protest in Quebec City this weekend.

“We are aware that there is movement that might eventually make its way to the legislature in Quebec City,” said SQ spokesperson Sgt. Hélène St-Pierre. “Everyone has the right to demonstrate but to do so respecting laws and bylaws.”

The SQ will be present in the provincial capital and prepared enforce those laws, St-Pierre said, adding that she would not provide details of the force’s plans for “strategic operational reasons.”

St-Pierre’s statement comes after reports on Tuesday that an effort was under way to organize a protest in Quebec City on Saturday similar to the truckers convoy that went to Ottawa last weekend. As was the case in Ottawa, the focus of the protest is the province’s ongoing health restrictions in response to the COVID-19 pandemic.

One of the apparent organizers of the protest is Bernard (Rambo) Gauthier, a union official who first came to the public’s attention during the Charbonneau inquiry into corruption in the Quebec construction industry.

On Tuesday FTQ-Construction president Éric Boisjoly, said the union would not financially support the protest.

While he said he supported the right to protest, Boisjoly called for more support for health care workers who were exhausted by the pandemic and those patients whose treatments were delayed or cancelled because of hospital overcrowding.

Boisjoly said he respected an individual’s choice not to be vaccinated, it was not the role of the FTQ to challenge public health directives.

By 1:30 p.m. Tuesday messages on Gauthier’s Facebook page spoke of more than $6,300 raised thus far to finance a protest in Quebec City and other locations in the province.

Should the protest in Quebec City materialize it would coincide on Saturday with the first full day of the Quebec City Winter Carnival, a possibility event organizers said on Tuesday they were in the process of preparing to meet.

In a statement emailed to the Montreal Gazette on Tuesday, Carnival president Mélanie Raymond wrote that “(w)e have learned it is possible there will be a demonstration in front of the National Assembly in the coming days. It would clearly be unfortunate if the Carnival became a collateral victim of the demonstrations, as it is already operating in a very difficult context and is trying to offer an alternative to the prevailing gloom. However, if necessary, we will contend with the events.”

Raymond wrote that organizers “are currently analyzing the situation in concert with the relevant authorities. Our priority is to ensure everyone’s safety.”

All our coronavirus-related news can be found at montrealgazette.com/tag/coronavirus .

For information on vaccines in Quebec,  tap here .

Sign up for our email newsletter dedicated to local COVID-19 coverage at  montrealgazette.com/coronavirusnews .

Help support our local journalism by  subscribing to the Montreal Gazette .