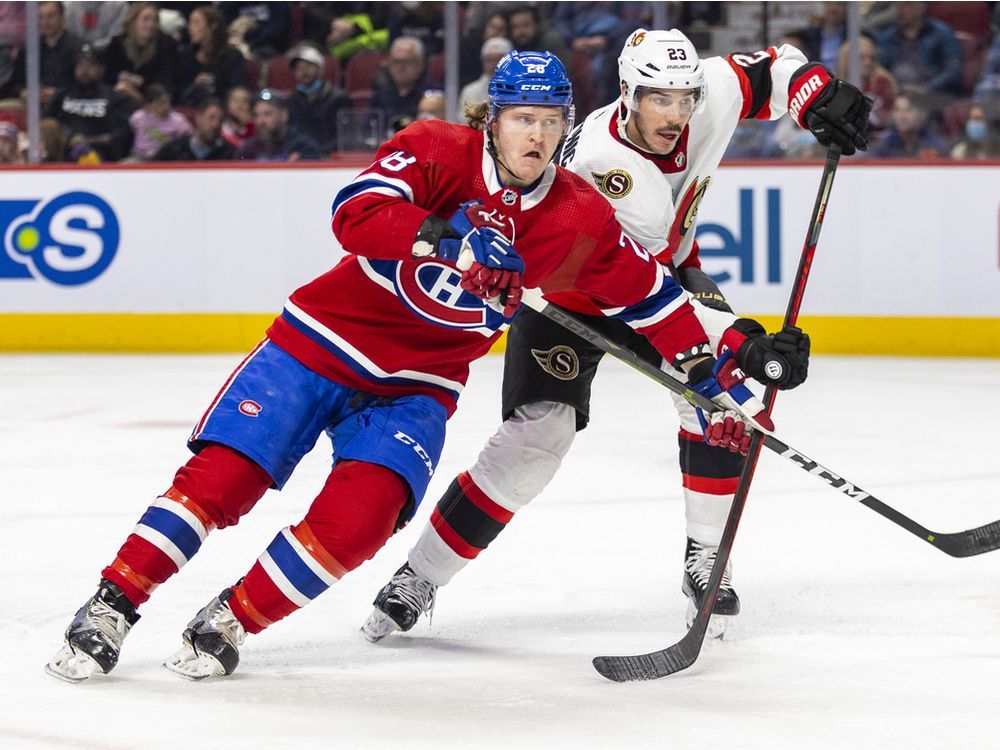 The Canadiens went into this season hoping Christian Dvorak would be able to replace Phillip Danault as the team’s No. 2 centre behind Nick Suzuki.

After Danault left Montreal as a free agent last summer, signing a six-year, US$33-million contract with the Los Angeles Kings, former general manager Marc Bergevin acquired Dvorak from the Arizona Coyotes, where he had spent the previous five seasons. Bergevin gave the Coyotes a conditional first-round pick at this year’s NHL Draft and a second-round pick in 2024 in exchange for Dvorak.

That trade came after Bergevin had lost Jesperi Kotkaniemi to the Carolina Hurricanes, deciding not to match a one-year, US$6.1-million offer sheet. The Canadiens received a first-round pick and a third-round pick at this year’s NHL Draft as compensation for the 21-year-old centre.

Dvorak is in the third season of a six-year, US$26.7-million contract and his annual salary-cap hit of $4.45 million is $1.05 million less than Danault’s with Los Angeles.

The 29-year-old Danault is having a career season with the Kings, posting 21-23-44 totals and a plus-12 in 72 games, while winning 53.8 per cent of his faceoffs. Danault has already set a career high for goals, far surpassing his previous high of 13.

The 26-year-old Dvorak has had a tough first season with the Canadiens, missing 26 games because of injuries. Heading into Monday night’s game against the Winnipeg Jets at the Bell Centre he had 10-14-24 totals and was minus-14, while winning 56 per cent of his faceoffs. But like every player on the Canadiens, Dvorak has looked better since Martin St. Louis took over as head coach on Feb. 7.

Dvorak missed Dominique Ducharme’s last four games as head coach and the first 15 with St. Louis behind the bench because of a neck injury. Before facing the Jets, Dvorak had 3-5-8 totals in the previous nine games.

“It’s tough coming out of the lineup with an injury,” Dvorak said after Monday’s morning skate in Brossard. “It’s nice to finally kind of get a rhythm out there, get into game shape and stay in the lineup. I’ve been feeling better as we’ve gone along here since I’ve come back and hopefully just keep it going here the rest of the way.

“It’s been a lot different since (St. Louis has) gotten here and I think we’ve been playing pretty good hockey,” Dvorak added. “I was injured when he first got here for a bit, but since I started playing it’s a fun brand of hockey to play when you’re playing fast out there and playing with the puck a lot more. So it’s been a good time.”

Like Danault, Dvorak has earned a reputation as a two-way centre whose strengths are in the defensive side of the game. Dvorak’s best offensive season was 2019-20, when he posted 18-20-38 totals in 70 games.

“I think he’s been looked at as a defensive player, but I think there’s offence in there that’s still a little bit untapped that I want him to feel free to play,” St. Louis said Monday morning. “But Devo is low maintenance. Devo’s … not a guy that needs a touch every day and talk to. He’s very low maintenance and he’s a pro.

“I’m coaching a team, but I’m coaching individuals differently,” St. Louis added. “With Devo, because he’s low maintenance, I still have to make sure that I communicate with him a little bit and I try to do that and give him that confidence and freedom that he can bring some offence to this team — and he’s shown that. I’m glad he came back from the injury and got a chance to really get more than two, three games to see what I have — and it’s been good.”

Since taking over as head coach, St. Louis has been praised by his players — including Dvorak — for being straightforward and honest when communicating with them.

“We all know the player he was, so it’s nice to bounce things off of him and learn from him,” Dvorak said.

The adjustment to a new team and a new city hasn’t been easy for Dvorak and the situation with COVID-19 hasn’t helped. During his five seasons with the Coyotes, Dvorak only played three games in Montreal, so he didn’t know the city well. With COVID-19 restrictions loosened recently, he’s been able to see more of the city and enjoy some of the fine restaurants.

He said he’s feeling more comfortable on and off the ice.

“Making more plays with the puck and definitely want to finish the year the right way offensively,” Dvorak said. “I struggled with that at the start of the year. I think it’s been coming along nicely here as of late. Just want to keep that going the last 10 games, I think it is, the right way and have some good momentum heading into the summer and next season.”