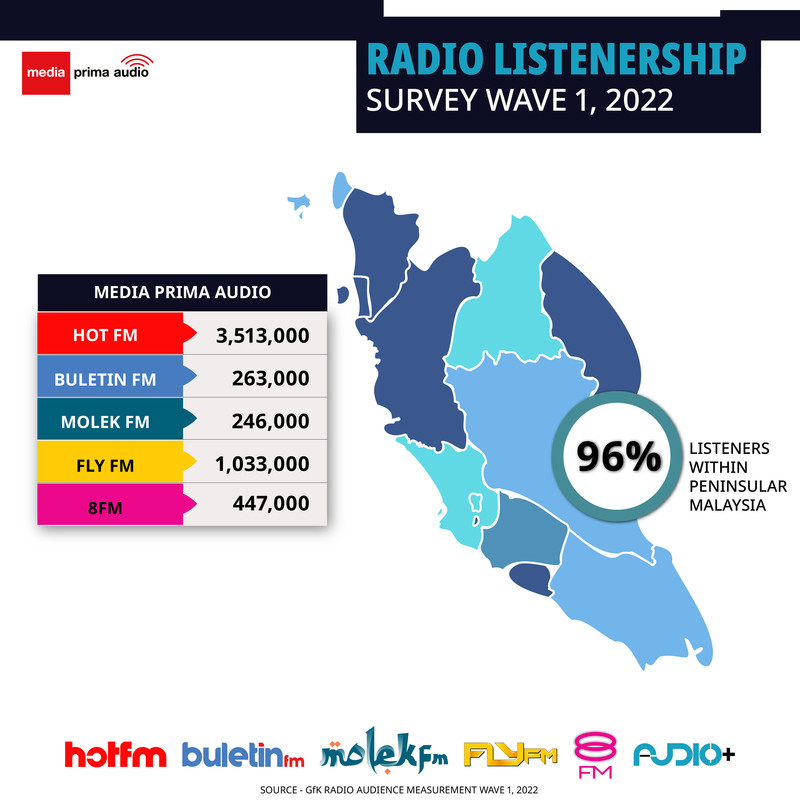 ACCORDING to the GfK Radio Audience Measurement Survey (RAM), listenership for Malaysian radio is now up to 96 per cent of individuals in Peninsular Malaysia, or 21.3 million weekly listeners — a 217,000 increase from the previous survey.

GfK has been measuring radio and television audiences for over four decades and is a reliable market and consumer data source.

With over 13,000 market research experts, GfK has long-standing data science expertise, as well as global insights and local market knowledge in over 100 countries.

The Radio Audience Measurement study included a sample size of 6,639 people and was conducted over six weeks using a mixed methodological approach.

As one of the most influential radio networks in the country, Media Prima Audio (MPA) continued to shine, kicking off the year with a full slate of new material, new talent, creative ads and activation, resulting in impressive audience figures.

Hot FM continues to be one of the country's most popular radio stations, with 3,513,000 weekly listeners.

Listeners with a household income of RM8,000 and above also increased by 11 per cent.

In addition, with 1.8 million Twitter followers and 1 million TikTok followers, Hot FM is one of the most popular radio stations on social media.

Buletin FM also strengthened its status as a respectable radio station for Professionals, Managers, Executives and Businessmen (PMEBs), with a 40 per cent rise in listenership.

Buletin FM has also launched several projects, including Usahawan Buletin FM, which aims to support small local businesses and Masterclass Buletin, which invites speakers to come on the show and share instructive business information with the audience.

Molek FM reaches out to a wider audience in the East Coast states of Kelantan and Terengganu.

The station has a total of 246,000 weekly listeners. Molek FM has registered 7 hours 46 minutes of Time Spent Listening (TSL) per week despite its recent inception.

On March 24 and April 24, Kamilia and DJ Nazz joined the Molek FM family.

Fly FM has increased its weekly exclusive listenership to 96,000 people.

The radio station also conducted contests like Fly FM Boomerang Tunes, in which listeners could win cash by guessing the title and artist of boomerang tracks. For example, listeners had to guess the artists' names and the titles of all five beats to win cash prizes in Fly Five Beats.

There has also been a 54 per cent increase in listeners with a household income of RM8,000 or more.

SPM Saya Pun Mampu, 过好生活之你好夏天(8FM Hello Summer), and 过好生活之跟我揾食 (8FM Food Award) were some of the 8FM campaigns led by 8FM breakfast broadcasters Royce and Angeline. Listeners participated in these campaigns by calling in and winning cash prizes.

For more information, readers can visit the MPA website.