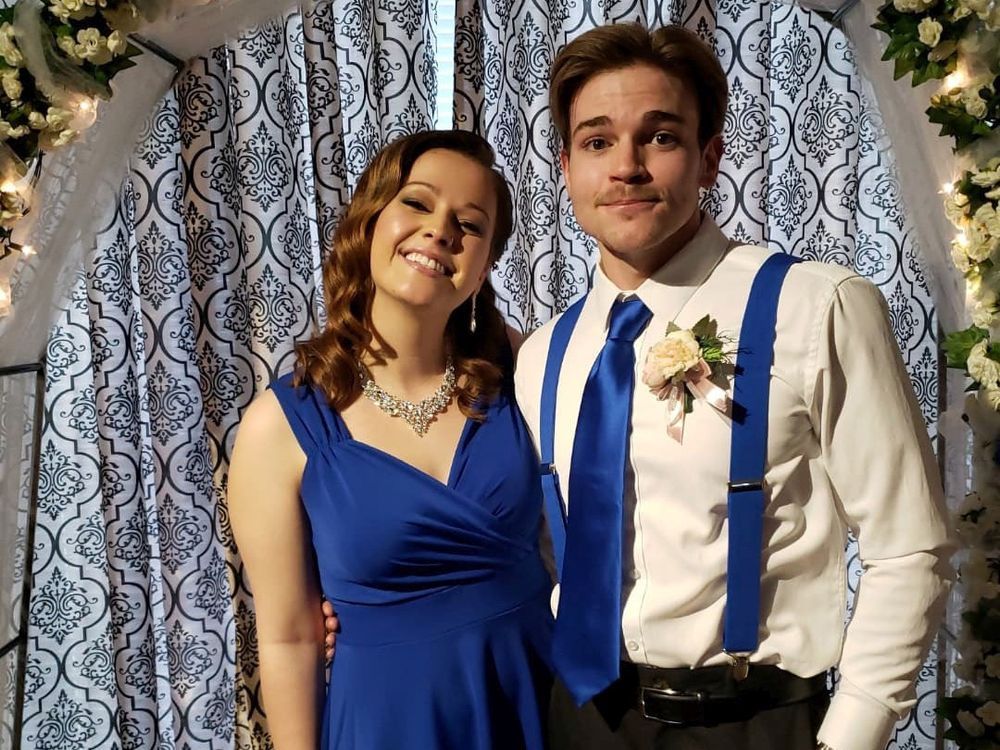 Kirklyn McGean was trying not to think about anything as he jumped between flights from Fort St. John in B.C. to Calgary.

The 24-year-old knew his fiancée Megan Gallagher had been in a plane crash April 22 near the Springbank Airport. He saw pictures of the crash online, and the damage to the four-seater plane. He read media reports the pilot had died. He didn’t know whether Gallagher was alive or not.

“Part of my brain knew the reality. She’s not going to make it — no one can. People don’t survive plane crashes.”

Gallagher is a pilot and flight instructor working in Fort St. John. One of her students recently bought the Mooney M20K single-engine plane and asked for her help getting it back from Calgary.

Gallagher agreed to help and flew from Fort St. John to Springbank to pick up the plane. There she met up with Michael James Wilton, 45, who was an expert flying this type of aircraft. Wilton offered to pilot the plane and go over the controls with Gallagher, free of charge.

An hour before the flight, Gallagher told McGean they were preparing for takeoff. When the plane was in the air, it suddenly began losing altitude and crashed to the ground.

Paramedics arrived around 3:20 p.m. and found two people in the wreckage. Wilton was declared dead at the scene.

What happened next was “nothing but a miracle,” McGean said. “There’s no other word to describe it. We can’t even wrap our heads around it, it’s incredible.”

Gallagher survived the crash and was taken to Foothills Medical Centre with life-threatening injuries.

McGean first met Gallagher two years ago when he was spending the summer at her cousin’s lake house in Manitoba.

“We just immediately became best friends, it was just seamless. Like we’ve known each other forever,” McGean said.

He was living in Lac La Biche at the time, while the 22-year-old lived in Ontario where she was training to become a pilot. A relationship grew as soon as Gallagher decided to move back to Calgary with her parents.

“We just kept talking. Nothing ever felt forced with her, it was so easy.”

The two moved together when Gallagher found work as a crop duster in Saskatchewan. That’s when McGean asked Gallagher to marry him.

The couple moved together to Fort St. John, where Gallagher got a job as a flight instructor. They were engaged for six months when Gallagher left to fly to Calgary.

When Gallagher is well enough, McGean said, he hopes to get married at the lake where they first met.

‘She will fly again’

The road to recovery will be a long one for Gallagher.

She suffered extensive injuries from the crash, including damage to her lower and upper spine, a brain bleed, fractured ribs and a bruised heart. McGean said doctors estimate she will be in hospital for about a month before she begins physical therapy and rehabilitation.

However, McGean said Gallagher is quickly making progress in her recovery. He credited the health-care staff at Foothills for taking “incredible” care of her.

She hasn’t been able to speak yet, but she is awake and conscious of what’s going on, he said. Earlier this week, she was well enough to write a message on a pad of paper for her best friend, telling her that she still wants to “fly forever.”

“At Thanksgiving, they made a deal that they’re going to do their passion forever. And nothing’s going to stop them,” he said.

Despite everything Gallagher has gone through, McGean said he has no doubt she will emerge stronger than ever.

“It doesn’t matter if she doesn’t walk out of here right now. She will walk again and she will fly again. There’s no doubt in my mind. She is friggin’ stubborn, and I love her so much for that.”

A GoFundMe page has been set up to support Gallagher and her family.