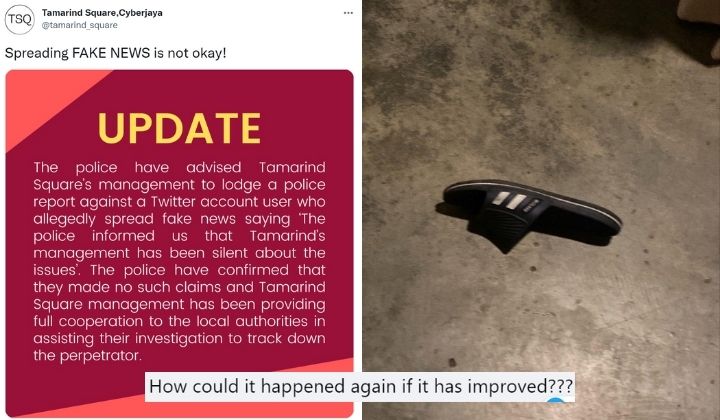 After capturing the Tamarind Square serial molester, the business park in Cyberjaya posted on Twitter alleging that the police have advised them to lodge a report against a Twitter account user for spreading fake news.

Based on the post, the Twitter user has allegedly claimed that the police were the ones who said Tamarind Square management had been silent about the sexual harassment issues.

However, the police stated that they have made no such claims and the management has provided full cooperation to the local authorities.

As such, the Tamarind Square management has turned around to accuse the Twitter user of spreading fake news.

However, this did not go down well with netizens. Netizens pointed out that the issue has been ongoing for some time.

Some said that the police only managed to apprehend the suspect only after the stories went viral online.

They also criticised Tamarind Square for subjecting the victim to potential charges on top of an already traumatic experience from sexual harassment.

One of the victims @nrsyfreyna wasn’t pleased with the post and asked why would she risk her privacy and spread fake news.

But the issue had been happening for quite some time. Baru nampak tindakan.

You guys need better PR. You can discuss with the victim, why they claim so, and help clarify things. They were facing harrasment, they are not stealing money. On top of the horrible experience they had to face at your premises, now have to face charges. Tsk tsk.

Oh wow. Why would i risk my privacy to spread fake news? Why is the victim wanted to lie?? What’s the point? What do we get from lying? Bulan puasa ni tak baik tipu. https://t.co/VEwY9ZauSn

Report points out the lack of CCTVs in the area

Tamarind Square posted on its Facebook page on 6 April promising that the security in the area has been expanded and improved.

Prior to this case, Tamarind Square’s management promised to install more CCTVs and ramp up security in the area after the first molest incident last December.

Malaysiakini did a check on 8 April and found otherwise.

Malaysiakini observed that there were no CCTVs overlooking the basement car park and entrances leading into it. Only one CCTV overlooks one of the lifts in Block A Level 1 basement parking.

Malaysiakini also noted that the CCTVs in the escalator entrances on all three levels in the basement parking only covered one of two entrances, resulting in many blind spots.

These CCTVs were placed inside of the entrance into the building but did not appear to face the car park.

On top of this, there were no panic buttons in the car park. No guards were seen patrolling the car park too although a worker confirmed that a guard would patrol the basement once every few hours.

The suspect was spotted on footage from other areas of the business park and was identified based on descriptions given by the victims.

Netizens questioned why the parking lot is still dark if security efforts have been ramped up. They also said they did not see any security guards making the patrol rounds.

They feel unsafe whenever they have to park there and one time, a netizen had to navigate the dark car park using her handphone light.