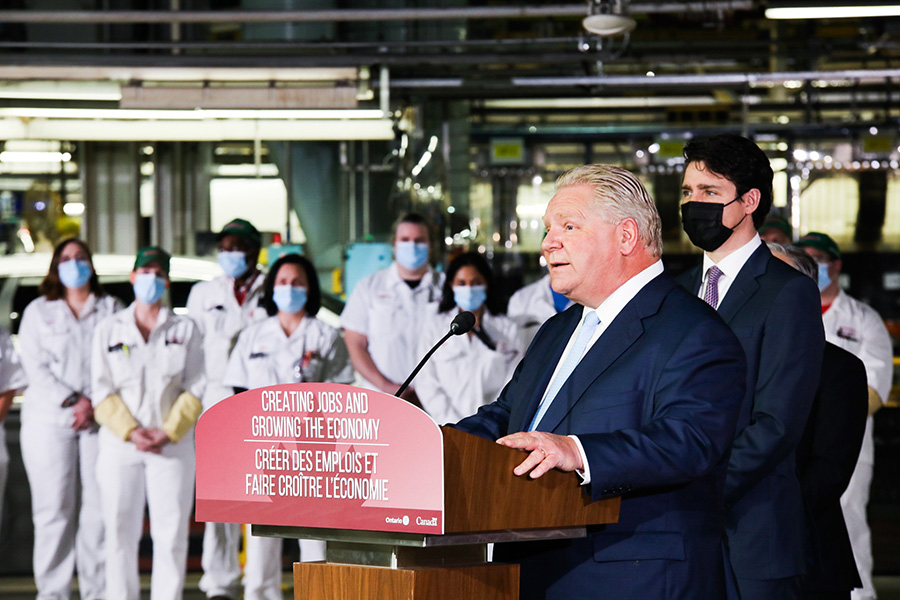 Ontario Premier Doug Ford was in Alliston with Prime Minister Justin Trudeau on Wednesday to announce plans for a $1.4 billion retooling of the Honda Canada plant to build new hybrid and electric vehicles.

The premier, who drives a Lincoln SUV last time we checked, trumpeted the investment “to bring Ontario one step closer to becoming a North American hub for building the cars of the future.”

That pronouncement might come as a bit of a shock to those who remember how Ford did away with rebates encouraging Ontarians to buy electric vehicles and unilaterally dismantled programs by the former Liberal government of Kathleen Wynne to expand electric charging stations around the province.

But that was then. With a provincial election around the corner, clearly, Ford wants to be able to take some credit for the “thousands” of jobs that will be secured and the skilled labour the plant retrofit will attract.

With Trudeau by his side, the premier was also asked about the long-delayed $10-a-day child care plan that the province and feds have been negotiating for months now. Ford suggested there will be news on that soon, perhaps even next week. Holding off was always the plan to ensure a bigger bang for Ford‘s re-election chances.

To some conservative columnists, it all looks like Ford is hitching his re-election chances to Trudeau’s wagon. It’s not a bad bet given how the Ontario electorate supported the PM in the last federal election, particularly in the 905 and Toronto areas. The question is: What’s in it for JT?

The child care deal will no doubt help cement his political legacy. Ontario is the only province that has yet to sign a deal. But the PM also has an interest in seeing Ford stay out of the Conservative Party leadership race. That issue, according to one Liberal insider, was part of discussions that took place between the PM’s peeps and Ford before Wednesday’s announcement.

Both the premier and PM, it turns out, would welcome the CPC contest turning into a knock ’em down and drag ’em out affair. For Ford, the reasons are personal. For the PM, they’re political.

Just like last September’s federal election, the premier has already said that he won’t be publicly supporting any of the candidates running to be CPC leader. He has reportedly ordered Queen’s Park staff and his MPPs not to get involved.

There’s a practical reason for that. He doesn’t want Queen’s Park staffers who could be helping him get re-elected diverting their time and attention. Coincidentally, the cut-off for CPC leadership candidates to sign memberships is June 3, the day after the provincial election.

On the face of it, Ford‘s populist base would seem to have more in common with current leadership frontrunner Pierre Poilievre. Conventional wisdom, on the other hand, has it that a CPC led by Jean Charest, Poilievre’s main rival so far, might pose more of an electoral challenge for Trudeau in Quebec and Ontario.

Ontario is pivotal to Charest’s leadership chances. In that regard, many of the MPPs in Ford’s caucus are holdovers from Patrick Brown’s tenure as leader of the Progressive Conservative Party of Ontario. Brown, who went on to become mayor of Brampton, has also thrown his hat into the CPC race and has reportedly agreed to a non-aggression pact with Charest, who has been a political mentor.

The two have agreed to help each other and we’ve seen that in spades in the first few days of the campaign with Poilievre’s people going hammer and tong after “liberal” Charest and “say and do anything” Brown, and Brown returning the favour and going after Poilievre for supporting the Harper government’s niqab ban in 2015 – not to mention, the so-called “barbaric cultural practices” snitch line.

Poilievre, who is used to playing offense in politics, was put on the defensive issuing a statement accusing Brown of lying. He took issue with Brown’s characterization of Harper’s proposal as a “ban,” noting that “What Mr. Harper proposed was that a person’s face be visible while giving oaths at citizenship ceremonies.”

Brown shot back with a tweet posted by Poilievre’s campaign co-chair Tim Uppal calling out the “niqab ban” last June, which Uppal posted after four members of a Pakistani-Muslim family were run down and killed in an attack in London, Ontario. Uppal wrote that he had “some accounting to do” for supporting the proposal as minister of state for multiculturalism at the time. Score one for Brown.

We can expect more of Brown raising his sharp elbows against Poilievre – and allowing Charest to look like the adult in the room and stay above the fracas.

All of which serves Trudeau’s purposes. The more blood spilled between now and when a new CPC leader is selected in September, the better Trudeau’s chances of being re-elected.

To be sure, whoever wins, it’s looking once again like the CPC will be left with a divided mess going just as it was with Erin O’Toole at the helm in 2021 and Andrew Scheer before him in 2019. A Poilievre win would drive moderates and progressives in the party to vote Liberal. Conversely, a Charest (or Brown) win would drive the right-wingers into the arms of the People’s Party of Canada – or back into the political wilderness.

The CPC won’t have much time to get ready with a new leader installed in September and an election quite possibly a year or 18 months after that. We might yet see another one-and-done and the ouster of a CPC leader who again failed to beat Trudeau.

That’s where Ford comes in and gets to swoop in and position himself as the saviour to unite the CPC. It’s a job he’s always coveted. Presumably, he would’ve had his fill of two terms as premier by then.