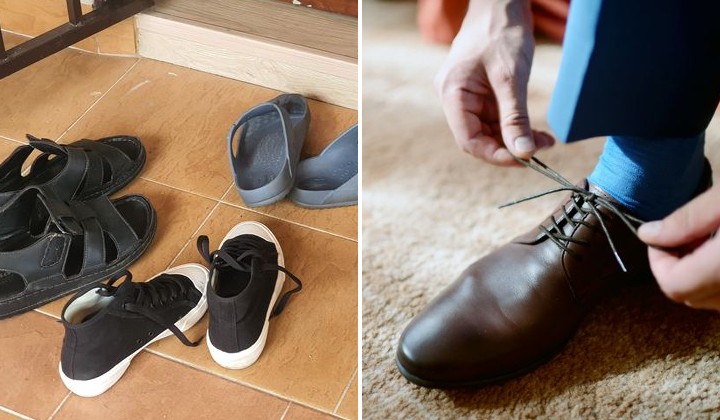 Westerners have long been known for their tendencies to keep their footwear on in their homes, tracking their outside shoes (which have been outside!) through all manners of carpets, rugs, and floors.

Most of the world sort of assumed that movies showing people trekking through the house or sleeping in bed with shoes on was just another fantastical bit of Hollywood nonsense, but this recent Wall Street Journal article wedged a huge divide between people who do and people who don’t wear shoes in the house.

In the article titled ‘Here’s Why I’ll Be Keeping My Shoes on in Your Shoeless Home’, author Kris Frieswick presents the argument that homes are already very dirty and full of E. Coli bacteria, and that it is disrespectful to imply that their outdoor shoes are any dirtier than the floors of your home.

Frieskwick also goes on to say that babies and pets that roam outdoors are just as dirty… as shoes. (She also mentions that there are dangers to walking around barefoot in homes, such as stepping on Lego pieces, but this seems to be an afterthought.)

While it’s likely that Frieswick says as such because her home isn’t mopped at least twice a week, unlike majority of Asian homes, the article shone to light on the fact that real people actually make it a habit of wearing their outdoor shoes in their house all the time, and will actually get upset if you tell them that’s a dirty habit.

Before we pick up our pitchforks and mops, Frieswick’s opinion may not be a true reflection of all Westerners. However, there is a large-enough population who DO wear their outdoor shoes indoors constantly, enough for it to actually be a problem.

Australian environmental chemists have conducted a study which tells us exactly what the non-shoe-wearing population of the world has been saying for decades: outdoor shoes are extremely dirty and do not belong IN your house.

What’s so bad about it?

Mainly, the biggest things are dirt and dust. (Again, shocker.)

But it’s actually what’s in the outside dirt and dust that’s more conerning.

According to the study, there are more than just E. Coli and poop stains on your shoes. In fact, there’s a lot of harmful stubstances that include a bunch of chemicals and toxins you don’t want anywhere near you:

Any of these can be picked up as you go about your daily life, whether you head to the kopitiam, use the public toilets, visit your car mechanic, pick up medicine at the pharmacy, walk through gardens that use pesticides…

The point is, we go to a lot of places over the course of a day, and pick up a lot of stuff on our shoes… and frankly it’s only logical that you don’t bring that indoors.

For some reason, however, this sort of logic seems to be an Asian thing, because it also wasn’t that long ago before Americans discovered they should be washing their butts with water instead of wiping with toilet paper.

READ MORE: Washing With Water Is Better Than Using Tissue: American Scientists Just Figured This Out