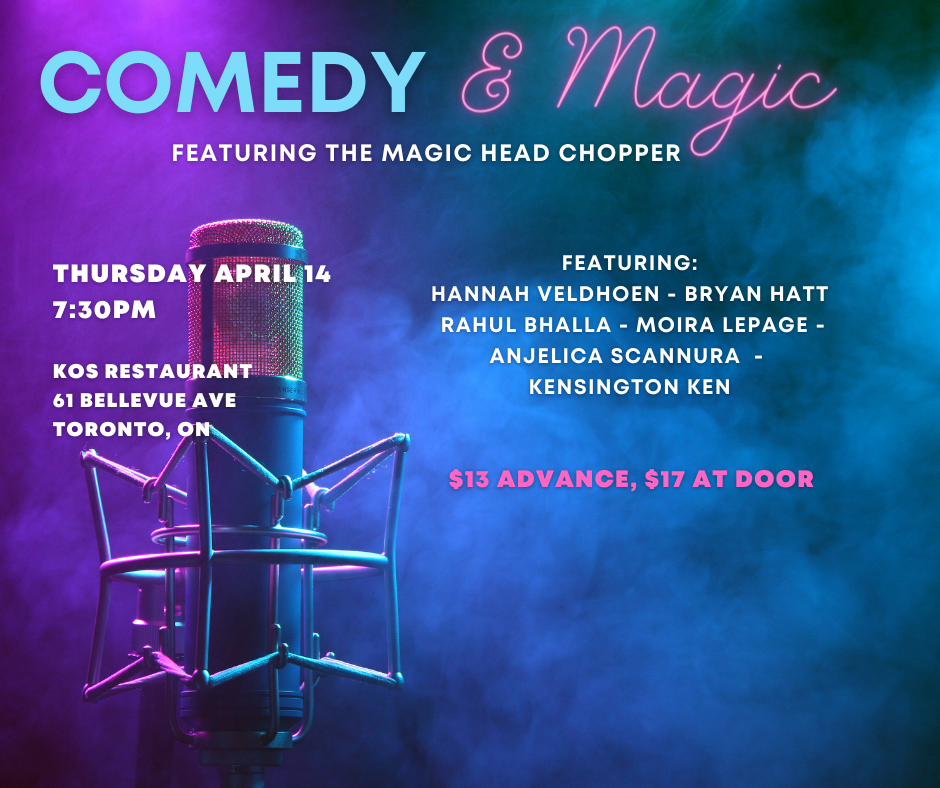 Kick off the long weekend in style with some hilarious comedy and amazing magic! We have 5 awesome professional comics for you, and one somewhat amusing magician. This week, we are featuring the magical head chopper, along with a bunch of other interactive magic illusions. Who is brave enough to be the volunteer?

Tickets are just $13 in advance and $17 at the door (if available). Tickets are limited, so get yours while you can.

This week’s lineup include:

Bryan Hatt: After nearly two decades in comedy, Bryan has successfully transformed into one of the best acts in the country. He has filmed a Comedy Now for the Comedy Network, appeared on the Halifax & Winnipeg Comedy Festivals, and was a finalist in the Great Canadian Laugh Off. Bryan has opened for legends like Gilbert Godfried, Harland Williams, Big Jay Oakerson and more! He’ll make you laugh and feel thinner all at once!

Anjelica Scannura: Recently selected to be a featured performer in this year’s Winnipeg Comedy Festival, she’s definitely one of Toronto’s fastest rising stars. She was a finalist in Toronto Comedy Brawl 2019, and the winner of the ‘I Heart Jokes Awards’ 2018 Newcomer comic. As an actor, you’ve seen her in Disney’s Camp Rock, Disney’s Overruled, CTV’s Satisfaction, APTN’s Renegade Press, TIFF’s Manson My Name is Evil, and CBC’s Frankie Drake Mysteries.

Rahul Bhalla: Rahul is an almost 6 feet, up and coming professional standup comedian. He has performed at venues like Stand Up NY and Eastville Comedy Club in New York, and in sold out shows in Ottawa. He’s a financial analyst by day so you know he’s definitely funny.

Moira Lepage: Moira is a very fast rising Toronto-based comedian who recently won Comedy Nuggets’ Bring It New Talent Competition. She has spent the pandemic developing her comedy chops on Zoom, and has since performed at sold out venues across the city including the Social Capital Theatre, Comedy Bar and SeeScape.

Kensington Ken: He’s TikTok famous, and now he’s bringing all his tricks to the stage! Over 10 million video views can’t be wrong! This week, he’ll show one brave volunteer what it’s like to face the guillotine. Are you brave enough?