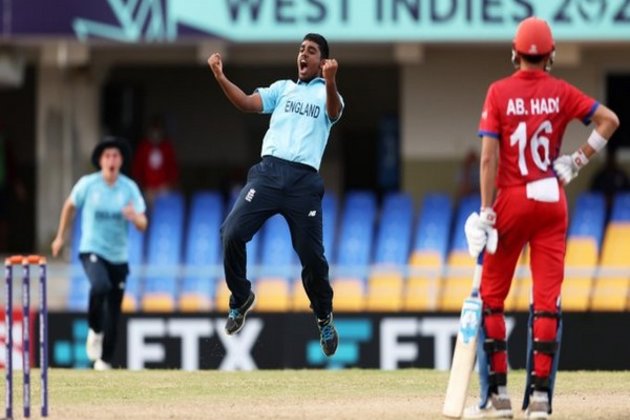 St John’s [Antigua], February 2 (ANI): After guiding his team to the finals of the ongoing U19 Cricket World Cup, England skipper Tom Prest said that achieving a score of more than 230 in the semi-final was amazing.

England kept their nerve to become the first team to reach the ICC Under 19 Men’s Cricket World Cup final after edging a thriller with Afghanistan by 15 runs.

“Didn’t expect it to get that tight as it did. Boyden was brilliant under pressure. Was quite a brave call choosing to bat. Had to put a score on the board. Something special that partnership,” said Prest after the game.

“Those runs were crucial at the end. We kind of thought 200 would be a great score. To get up to 230 was amazing. We feel he’s a great bowler who can hit the deck hard. Can’t really believe it (leading England into the final),” he added.

Spinner Rehan Ahmed became the hero for the Young Lions, taking three wickets in the penultimate over at a crucial point when their opponents needed just 18 runs from the last 10 balls.

England will now face the winner of the other semi between Australia and India on Saturday in the final – a remarkable turnaround from the previous tournament just two years ago in South Africa when they finished ninth.

As for Afghanistan, they will head to the Coolidge Cricket Ground for the third-place playoff. (ANI)