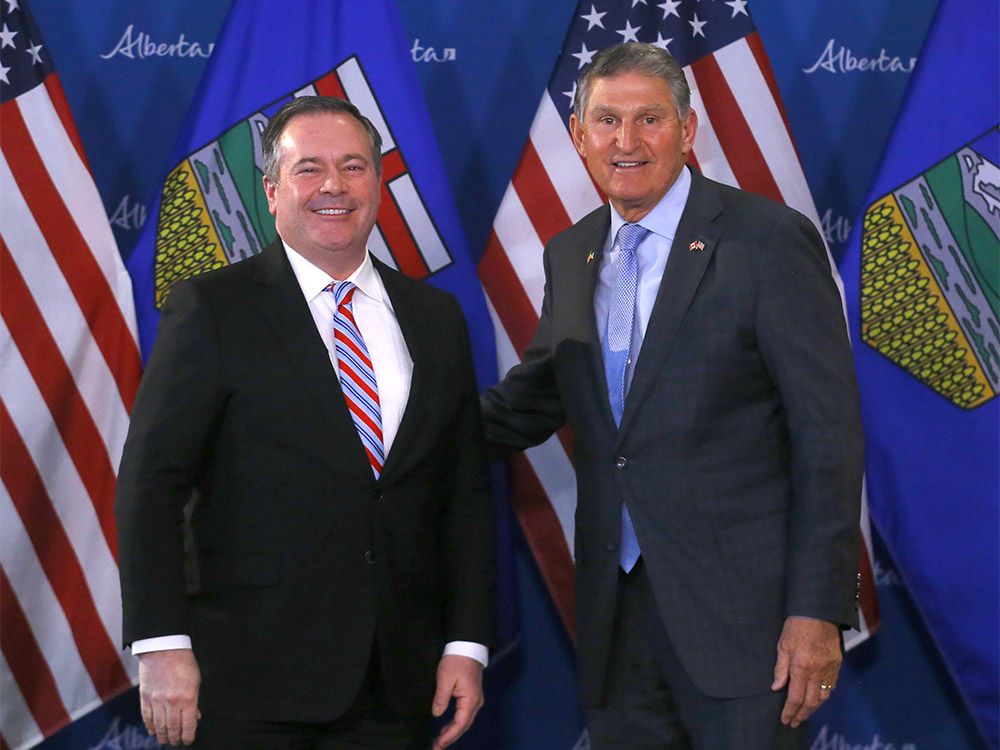 Premier Jason Kenney continued to push the message that Canadian energy is needed in The United States as the “most influential member of the legislative branch” took part in a whirlwind two-day tour of Alberta.

This week, Kenney hosted U.S. Sen. Joe Manchin, a Democrat from West Virginia who chairs the United States Senate Committee on Energy and Natural Resources. Both spoke Tuesday of the hope to create a North American energy alliance to become less dependent on oil and gas from other parts of the world.

“This visit of Sen. Manchin is a huge, I think, confirmation for us that we have friends in the United States who understand the important role that we play in American energy security,” said Kenney.

The visit comes amid the Russian invasion of Ukraine that has spurred calls across the Western world to move away from Russian oil. Manchin spent Monday and Tuesday in the province on a trip that included a tour of the oilsands near Fort McMurray and roundtable meetings with energy officials in Calgary. Alberta Energy Minister Sonya Savage also took part.

“We’re talking about this, this North American energy and climate consortium, and what it does. For the first time, we’re able to use the resources that we have, because we do it cleaner than anybody in the world,” said Manchin. “What the United States and Canada produces, whether it be natural gas, whether it’s extracting oil, whatever we do it’s the cleanest in the world — whatever we replace will be the cleanest in the world.”

He spoke about the need to move away from using foreign energy products. He said Putin’s invasion of Ukraine has shown that North America should become more self-reliant in terms of energy production.

“If you take the United States of America and you take Canada out of the fossil business, we’re the only ones that will spend the money that will make the effort to develop the new technologies that will clean up the climate,” said Manchin. “You take us out and Mother Earth is going to be in trouble on the climate. We’ll go to heck in a handbasket, and I believe that with all my heart.”

Manchin, while a Democrat, is seen as a centrist that has taken a conservative stance on many issues while in office. He was a defender of the now-defunct Keystone XL pipeline that would have moved hundreds of thousands of barrels of oil a day from near Edmonton to Nebraska. That pipeline, however, was cancelled by U.S President Joe Biden.

When asked about reviving the pipeline Tuesday, Manchin said the brand is gone but pondered if it could be brought back under a new name, saying pipelines are the safest way to transport oil and gas.

“I can’t guarantee there’s a company up here that wants to reinvest again, or if the administration is going to entertain that, but it’d be foolish not to,” said Manchin.

The senator’s visit is much different than many other high-profile tours of Alberta’s energy facilities in the past several years, as most have been environmentalists opposed to expanding oil and gas capacity.

Savage said Manchin’s visit was “based in reality,” calling it the most successful trip since she began working in the oil and gas industry.

“This was about learning and understanding and working together and co-operating,” said Savage.

When asked what tangible progress will come out of the visit, Savage said it will take time to know for certain but noted that Manchin is planning to invite government officials, including Kenney, to speak with members of Congress about Canada’s various energy sectors.

“I think the realization is they need more oil from Canada and they actually need Canada, they need Alberta. That’s the takeaway that I got from this,” said Savage.

NDP energy critic Kathleen Ganley responded to the visit by saying Kenney’s approach to the energy sector has been a failure and that the UCP’s “incompetence” has prevented a relationship with U.S. officials.

“The UCP’s photo op with the senator changes nothing. It did nothing to expand market access or get Albertans back to work. The UCP continues to fail Albertans on energy and can’t be trusted to manage the resources we all own,” said Ganley.