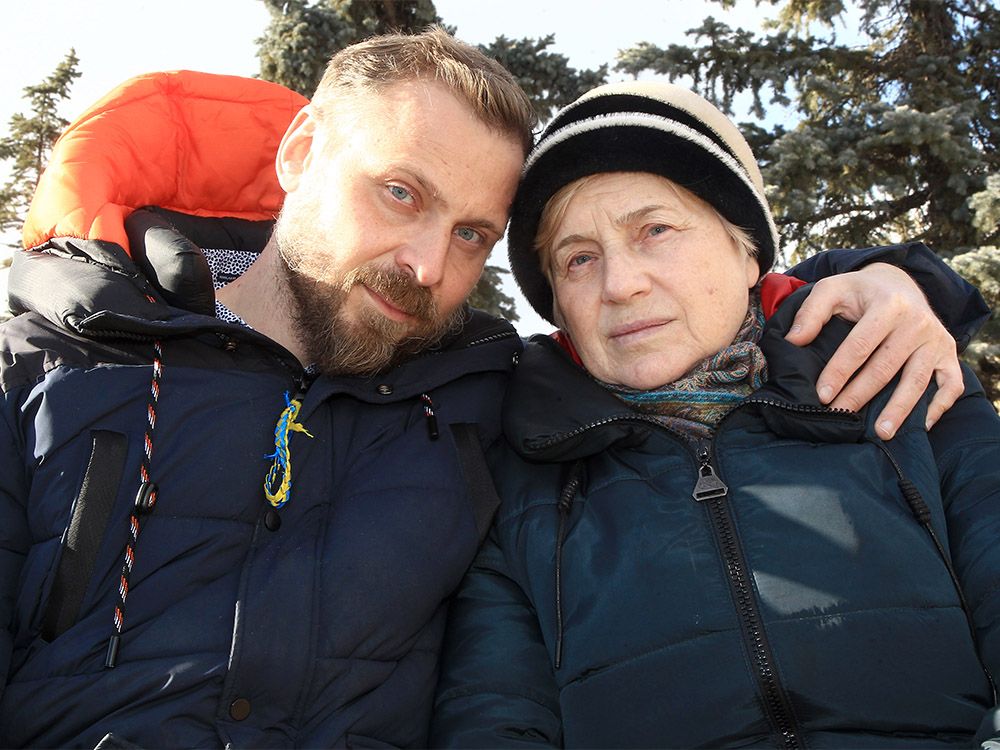 Twenty-two-year-old Valeriia Yelshynova was gripped with fear and panic as she made the decision to leave Ukraine with her cat, Euro, while the two were spending their fifth day in a bomb shelter near the capital city, Kyiv.

The decision started Yelshynova’s multi-day journey from besieged Ukraine to Calgary to move in with her aunt and cousin. Her experience is one that many Ukrainians now share, as millions of people flee the country due to the destruction and deaths caused by the Russian invasion.

“I felt like I’m paralyzed and I don’t know what to do next,” Yelshynova said Thursday, nearly a week after her arrival in Calgary on March 11.

“I talked with friends and family, and the main argument (to leave Ukraine) came from my aunt who said that I was alone and cannot help from where I was.”

Yelshynova was living with her cat in an apartment in Brovary, a city in the Kyiv region of Ukraine. She moved there after studying international relations at Lviv Polytechnic National University, but her family is from the Sumy region, in northeastern Ukraine.

Before the invasion, Yelshynova said life was normal. She spent time with friends and went to work, and the evening before the first missile attack on Kyiv on Feb. 24, she had gone to bed early.

Yelshynova, carrying Euro and a bag with important documents, snacks, cat food, medicine and some clothes, joined her friend in a nearby bomb shelter, where they stayed for three days.

She tried returning to her apartment before staying another two days in another bomb shelter.

After making the decision to leave Ukraine, she waited hours for trains to take her to Chernivtsi, on the west side of the country. She met up with friends who joined her in crossing the border into Romania, where she began a two-day bus trip to Naples, Italy.

“I stayed there for a while as we are discussing, is there any option to arrive in Canada to meet with my family?” said Yelshynova.

Yelshynova found out she could come to Canada using a visitor visa she had from a previous trip. Unfortunately, Euro had to be left with friends in Italy because she wasn’t able to complete his documents.

“I hope to see him very soon and to bring him to Calgary to stay with me,” she said.

When she arrived in Calgary last week, her aunt and cousin were there to welcome her.

As Yelshynova is getting settled in Calgary, she is overcome with worry for the safety of her family, some of whom have remained in the heavily militarized Sumy region near the Russian border, while others have moved farther west.

She keeps in touch — especially with her father, who says he is in a safe place.

“A very big thank you to all Canadians and people who are supporting Ukraine, somehow trying to help fundraise money or send food and clothes,” she said. “It is really meaningful for us knowing that we are not alone in this.”

Yelshynova arrived in Calgary the same day as 74-year-old Tamila Kovalchuk, who landed in the city with nothing but a pair of slippers and a shopping bag with some belongings.

Tamila’s son, Oleg Kovalchuk, welcomed his mother to Calgary after an exhausting seven-day journey from her home in Zhytomyr, a village 130 kilometres west of Kyiv.

He said shortly before Russia invaded Ukraine, he and his brother began to encourage her to leave the country.

“She was saying, ‘No, no. I don’t want to go anywhere. I’m staying here because here’s my home where I’m going to stay,’ ” Oleg said.

But when a hospital and school in Zhytomyr were bombed, Tamila was persuaded to head to Canada.

From Calgary, Oleg worked with Tamila to navigate her way from Zhytomyr to Canada. She first took a train full of seniors, women and children to Lviv, where she waited 14 hours to board a train to Poland.

She arrived first in Hrubieszow, then in Olkusz before ending up in Warsaw, Poland. She took two flights from Warsaw to Amsterdam, and then to Calgary. Along the way, Oleg said many kind strangers helped her, whom they are both grateful for.

“When she came to Calgary, I met her at the airport and was surprised she had only a shopping bag and slippers. She was tired and worried,” Oleg said.

Tamila is now living with Oleg, his wife, four children and their cats.

“From my perspective, she’s been traumatized,” he said, adding that they all continue to worry for the safety of family members who remain in Ukraine.

“It is very challenging, hurtful and heartbreaking for us. She has a sister there. Luckily, my brother was able to take her from Zhytomyr to a small village, where she’s living with a doctor.”

Oleg, who has lived in Calgary with his family for 11 years, works at the Maria Montessori Education Centre where he said students, teachers and administration had collected donations of clothes, money and gift cards to support the Kovalchuks and other refugees.

Tamila is also in Canada using a visitor’s visa she had previously received. Oleg said she’s asking every day when she can go back home to Ukraine.

“She did not want to leave. She waited very last minute when things were going not so great, like house bombings, civilians killed, hospital and schools destroyed,” he said. “I’m pretty sure a lot of generations will be traumatized after this.”

Inna Platonova, president of the Ukrainian Canadian Congress’ Calgary branch, said in a statement that the situation continues to evolve rapidly, as more family members and refugees arrive in the city.

“Some Ukrainians fleeing war will be reuniting with their families while others have no one they know in Calgary. Both groups will need different levels of support,” said Platonova.

She said more support will be needed, as the UCC Calgary partners with established immigrant and refugee settlement agencies to provide the necessary resources. The group has received hundreds of offers to help.

The federal government announced an expansion to a special immigration program — the Canada-Ukraine Authorization for Emergency Travel — that will allow an unlimited number of Ukrainian refugees to apply for expedited emergency visas. They will then be eligible for work or study permits of up to three years in Canada.

The government has also launched a job bank for those arriving in the country, and there is a family reunification pathway for those who are looking to stay in Canada permanently.