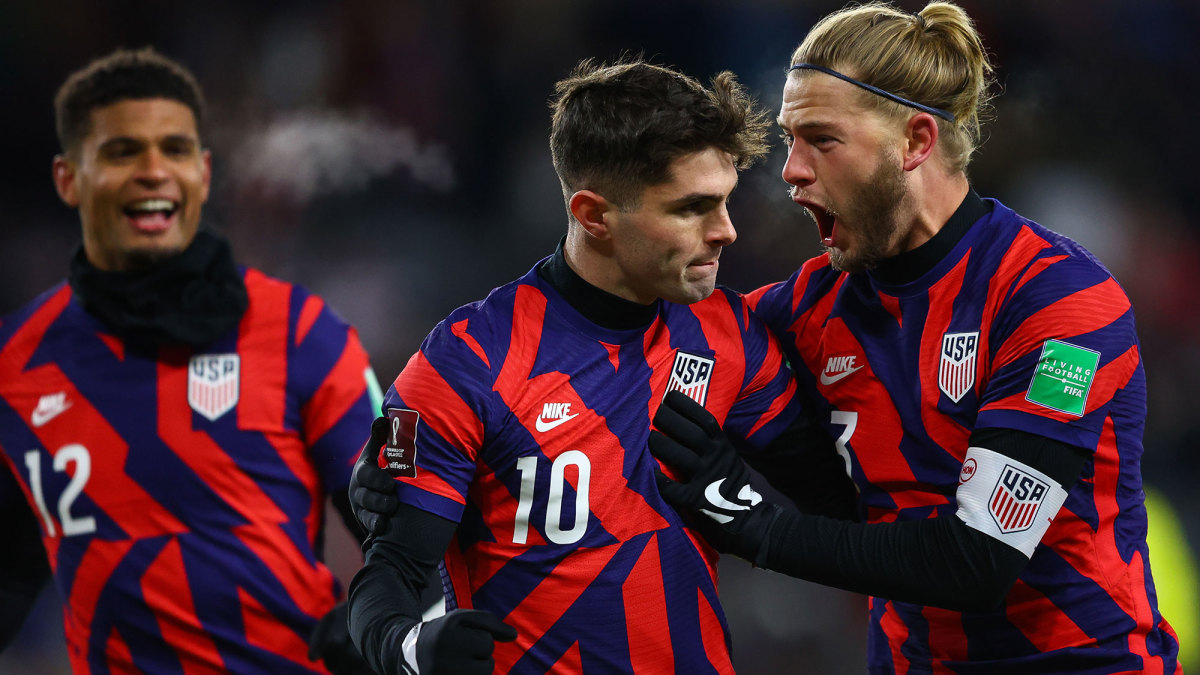 The most important U.S. men’s national team roster of this youth-infused era and of Gregg Berhalter’s three-year tenure—the one that will determine whether the Americans are in the World Cup draw on April 1—was unveiled Thursday evening.

Three years of tactical, technical and cultural development, along with the near-term fate of an unprecedented generation of young and ambitious U.S. talent, will be on the line over the next two weeks. The U.S. will train in Houston before visiting rival Mexico on March 24, hosting Panama in Orlando three days later and then concluding its qualifying schedule with a match at Costa Rica on March 30.

After waiting out the worst of the pandemic and then taking a crash course in the idiosyncrasies of Concacaf qualifying, the Americans find themselves at 6-2-3 and in second place in the region’s eight-team final round. The top three finishers advance directly to the November-December World Cup in Qatar and the fourth heads to a one-game playoff in June.

Five points across the three qualifiers would guarantee passage. Four would almost certainly be enough, and a home win over Panama would do the trick (and confirm a playoff place, at least) as long as fifth-place Costa Rica doesn’t run the table.

But those points won’t come easy. Three games in seven days, with international travel included, remains a high hurdle (consider that a given first-round group in recent World Cups usually is contested over 11 days). And this three-match stretch will be the U.S.’s toughest yet. Leaving it late when it comes to World Cup qualifying isn’t out of the ordinary. But the complexity of this upcoming window is. The Americans have never won a qualifier in either Mexico or Costa Rica, where the program is a combined 1-31-5 against those two sides (the lone victory came in a 2013 friendly at the Estadio Azteca).

Between those two trips will be the must-win home game against fourth-place Panama, which inflicted an ugly loss on the U.S. in October. The Americans have struggled inexplicably in the second match of the previous four windows, going 0-2-2 and scoring just twice in game No. 2. Berhalter will have to address that lingering issue while figuring out how to handle the exhausting transition that’ll follow the opener at Azteca, which sits a sapping 7,200 feat above sea level.

Injuries and yellow cards are a factor as well, and as usual. Although the U.S. is mostly healthy, the loss of Weston McKennie will sting. The 23-year-old Juventus midfielder had emerged as the national team’s most complete and consistently influential player following his September suspension for breaching pandemic protocols. He’s tireless, creative, effective on both sides of the ball and a threat to score. Unfortunately for the Americans (and Juve, which was eliminated form the Champions League this week), his season ended three weeks ago with a broken foot.

Goalkeeper Matt Turner and center back Chris Richards are among the other injured players omitted, and while outside back Sergiño Dest is included on Thursday’s list, his availability is now uncertain. He left Barcelona’s Europa League game at Galatasaray earlier in the day with what looked like a left hamstring problem. In addition, four U.S. players will be suspended for the ensuing qualifier if they receive a yellow card: goalkeeper Zack Steffen, right back DeAndre Yedlin, midfielder Tyler Adams and forward Tim Weah.

Berhalter’s 27-man roster averages 24 years, 185 days of age (for comparison’s sake, only one team at the 2018 World Cup averaged under 26—Nigeria by a hair). That sort of youth has been the norm for a squad that’s been overhauled and renewed, and a qualifying learning curve was anticipated. But that period has now passed. All that matters now are results.

Here’s a look at the men who will be charged with returning to the U.S. to the World Cup:

Steffen appeared to be Berhalter’s first choice when both he and Turner were healthy, and so he’s likely to start as long as he’s fit and available. Plagued by recurring back problems, the second-string Manchester City netminder missed out on the January-February qualifiers and last played for the U.S. in November. He’s appeared in three Octagonal matches so far, going 2-0-1 and yielding two goals against Costa Rica (2-1), Mexico (2-0) and Jamaica (1-1).

Steffen last played for City on Feb. 5 in an FA Cup win over Fulham. Turner has been out with a foot injury suffered in training with New England and he’s yet to appear for the Revs this season.

“He’s been training really well,” Berhalter said of Steffen. “We’ve been getting that feedback, and he’s ready to go.”

Dest’s health will be a significant story over the next few days, but Yedlin and Cannon are both comfortable at right back and have experience in Berhalter’s system. Robinson remains the clear choice at left back, but there’s no obvious relief at that position if Dest, who can play both sides, is unavailable. If Berhalter does wind up making a late addition to the squad to compensate for Dest’s potential absence, Arminia Bielefeld defender George Bello likely would be the front-runner.

“Regarding Sergiño, it’s not great news,” Berhalter said. “The initial diagnosis—it seems to be hamstring injury. But we’re going to get the final details [Friday]. But we may need to replace him, and we’ve already identified candidates to replace him and we’re already prepared to speak to him first thing [Friday].”

Zimmerman and Robinson are the best bets to get most of the minutes at center back, and Long finally returns from a long spell on the sideline following an Achilles injury. His inclusion, along with Palmer-Brown’s, is a sign that John Brooks’s national team tenure may be over. The Wolfsburg veteran hasn’t been called in since struggling in the September qualifying window. Palmer-Brown, 24, plays in France at Troyes and last appeared for the U.S. under Dave Sarachan in 2018 (he was invited to camp early last year).

“There’s some details in his game that I talked to him [about] that we need to improve to fit into our game model,” Berhalter said when addressing Brooks’s omission. “And we don’t have time on Tuesday to improve these things. The [Mexico] game is on Thursday. The [Panama] game is on Sunday. There’s not a runway here.

“So I think when this whole thing settles down and hopefully we’re in the World Cup, and we have the June window, the September window, I think there will be another opportunity for him where we can really start addressing where we think his deficiencies are to be the starting center back in our pool. But like all players, we’re never going to rule a guy out. That’s not how we work.”

Berhalter will be glad that he was able to get Acosta and De la Torre valuable minutes against Honduras in the freezing February qualifier in Minnesota. Both will likely get the chance to make a meaningful impact this month—Acosta with his defending, ball winning and set-piece delivery and De la Torre with his ability to progress and pass the ball.

“You don’t replace him. That’s the thing,” Berhalter said of McKennie. “He’s been so important to this group that we’re not going to plug a guy in and get a like-for-like. But that’s O.K. We’ve won games before without him and we’ll do it again.”

Figuring out a way to keep Adams and Musah fit and fresh throughout the seven-day gauntlet will be another challenge to confront. Both are vital.

The U.S.’s lack of consistent production from the striker position remains Berhalter’s most vexing challenge. The Americans have tallied 16 qualifying goals—good for second in the Octagonal—but just three have come via the striker. Pepi scored once in the third qualifier (the 4-1 win at Honduras) and twice in the fourth (2-0 win over Jamaica) and hasn’t found the net for club or country since.

Berhalter has also tried Pefok, Ferreira, Josh Sargent and Gyasi Zardes in that No. 9 role during qualifying. None has staked a compelling claim to the role. Although Pefok was left off the past three qualifying squads, his form with Swiss champ Young Boys has become impossible to ignore. The 25-year-old, who was born in Washington, D.C., and raised in France, leads the Swiss Super League with 17 goals and has notched six in his past seven games.

Winger remains the team’s strength. Pulisic is in outstanding form at Chelsea, for which he scored a key Champions League goal this week. Aaronson is the only player to appear in all 11 qualifiers, Morris is reliable and Weah has proven to be a consistently effective weapon out wide. In addition to all that, Reyna has finally returned. Injured while playing for the U.S. in September, the 19-year-old suffered numerous setbacks while trying overcome a hurt hamstring. After a couple of false starts, he appears to be fit again and has played twice for Dortmund in the past week, providing the assist on the only goal in a 1-0 win over Mainz on Wednesday.

“I had a good call with Dortmund today … planning out his usage and planning out how much we think we can use him,” Berhalter said. “The important thing is us qualifying for the World Cup, first of all. But secondly is Gio returning healthy to his club, and we’re mindful of his load. We’re mindful of the work that he’s done in the last couple of weeks and we’re going to adjust accordingly.”