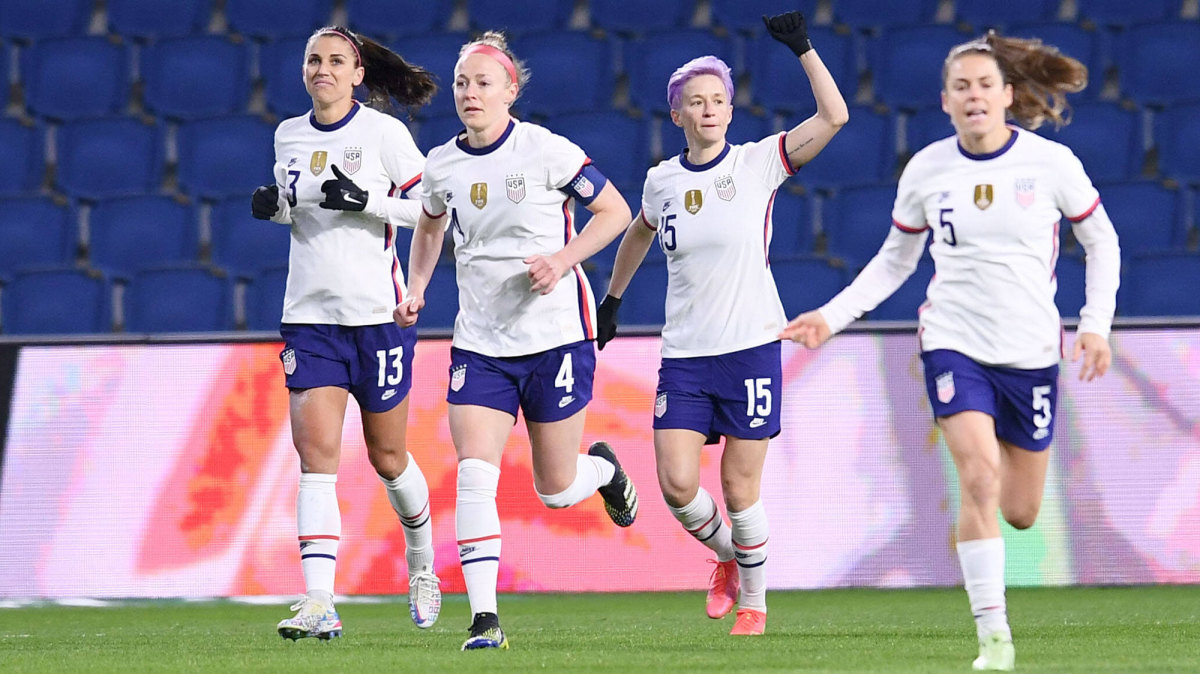 Vlatko Andonovski has spent the last 10 months since the Olympics reimagining the U.S. women’s national team player pool, calling on new faces while giving the stalwarts a break and cultivating a larger group from which to call upon for the matches that truly matter. The result is what the manager revealed on Monday, a 23-player group that will head to Mexico to determine the fate of the USWNT’s next two years.

Doubling as qualification for the 2023 Women’s World Cup and 2024 Olympics, the new Concacaf W Championship, held in Mexico from July 4–18, carries all sorts of significance, and the U.S. can ill afford the kind of slip-up that it has managed to avoid throughout its existence.

Called upon to meet that challenge is a team boosted by the return of veterans Alex Morgan, Megan Rapinoe and Becky Sauerbrunn and energized by the likes of a trio of Washington Spirit stars in Trinity Rodman, Ashley Sanchez and Ashley Hatch.

There were perhaps more openings than anticipated for lesser-experienced players, as this is a team that is decimated by absences for various reasons. Catarina Macario was set to enter camp on the heels of a stellar season with Lyon, during which she won the UEFA Women’s Champions League and French league titles, but she tore her ACL in Lyon’s last match and will miss at least the next six months.

“She was going to be instrumental for us in this qualifying tournament,” Andonovski said. “No words can explain how devastated we are for Cat’s injury.”

Center back Tierna Davidson and forward Lynn Williams were among the injury casualties during the NWSL Challenge Cup, while midfielder Sam Mewis has also been nursing a knee injury, Christen Press just picked one up, Abby Dahlkemper is also injured and Tobin Heath has been without a club since leaving Arsenal in April.

There’s also the contingent either preparing for or in the early days of motherhood, with Julie Ertz and Casey Krueger pregnant and Crystal Dunn having given birth to her son a few weeks ago.

Needless to say, assuming all goes well with qualification as expected, the squads that go to the World Cup next summer and the Olympics the summer after that could look markedly different from the one that qualifies for both competitions.

Andonovski indicated just how much injuries and other for-cause absences have shaped this squad, but he also said that Press would not have been included even if she hadn’t been injured with Angel City this past weekend, citing greater competition at her position.

“Christen was not on the roster even before the injury,” Andonovski said. “We’re very sorry for her injury and don’t have confirmed information on the significance. We just hope it’s not too serious.”

In addition to the 23 players who will go to Mexico, three additional players—defender Carson Pickett and midfielders Jaelin Howell and Sam Coffey—will take part in two friendlies against Colombia later this month that will serve as the final preparation for the W Championship. Once it gets to Mexico, the U.S. will face Haiti, Jamaica and the host nation in group play, where the top two finishers in each of the two groups will clinch automatic berths in the 2023 Women’s World Cup in New Zealand and Australia, the first 32-team edition of the event. The winner of the competition will then go on to clinch an automatic berth at the 2024 Olympics in Paris, while the second- and third-place finishers will duel in a September playoff for an additional Olympic berth.

“Since we were last together in April, we’ve been evaluating a lot of games and hours of video and have had extensive conversations among the coaching staff to arrive at this 26-player roster for the Colombia games and the final 23 for qualifying,” Andonovski said in a statement. “As usual, the players don’t make these decisions easy, but we feel this is a roster that can accomplish all of our goals over the four weeks we will be together for what we hope will be seven successful games.”

The returns of Morgan and Rapinoe might not be overly surprising, but they are indicative of a desire to go to battle with a team not wholly devoid of championship experience. Morgan is NWSL’s leading scorer (nine goals; Sophia Smith and Mal Pugh are next with six and five, respectively, and Andonovski hinted that they would be starters for the U.S. in these upcoming games), while Rapinoe has returned to action, even if her form isn’t World Player of the Year-caliber.

He roped them both and Sauerbrunn into a group of “experienced players who have gone through some tough times but great times as well, who know how to win under tough circumstances.”

As for Rapinoe in particular, Andonovski added: “Megan and I had a great conversation after the season last year. She understood the process that we’re going to go through and this team will take. I have to say that she had a tremendous Olympics, helped us win a medal. … We know what Megan is capable of doing. She is very important for this group. Her experience going through adversity, going through tough times and getting on top, her mentality, her winning mentality, her knowledge and understanding is very valuable for the group. For players like Mal, Soph, Trinity … I think she is going to be instrumental to help them go through these games, these qualifiers. At some point they’re going to need Megan’s voice and her responsibilities to be the best version of themselves.”

Here is the U.S. squad tasked with ensuring the world’s No. 1 team appears on the two grand stages in the next two years: