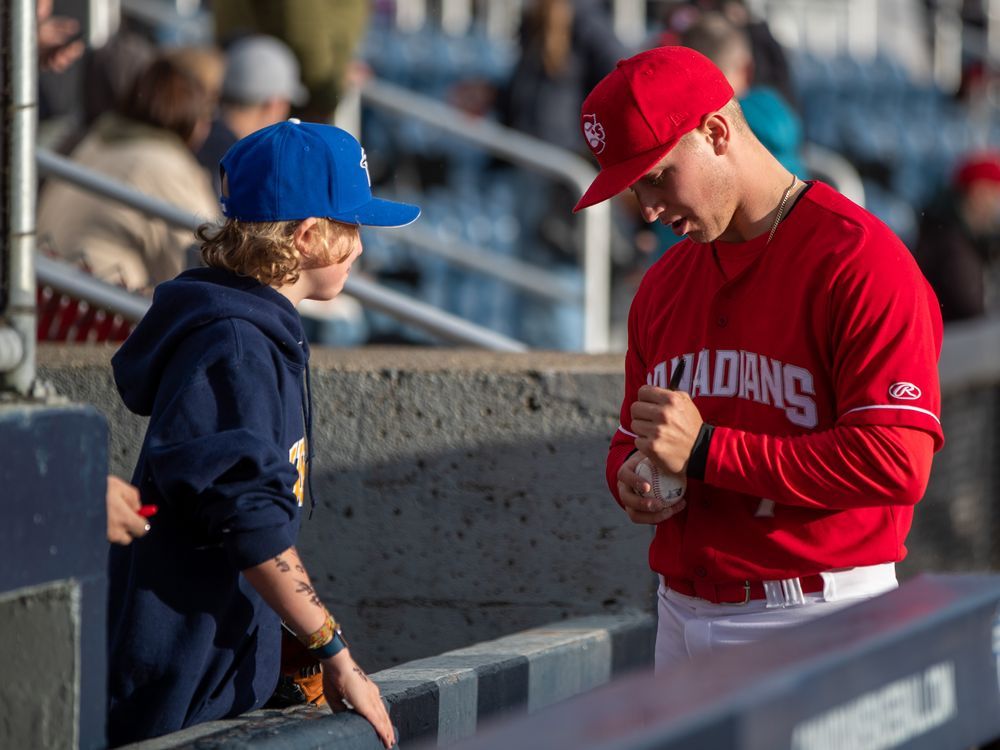 You can draw a straight line between Trevor Schwecke’s hot start with the bat for Vancouver Canadians and being sidelined for much of last season after breaking a bone in his spine.

The 24-year-old infielder/outfielder felt an immediate pain in his upper back in spring training last year after pulling away from a high and tight pitch. Schwecke suffered a transverse process fracture to his T-1 vertebrae, breaking one of the wing-like bones on the side.

It was a fluke thing, doctors told him. The main treatment was rest, leaving Schwecke with a lot of time to think as he was on the disabled list until August.

In that period, he vowed to stop worrying about things that he couldn’t fix. He started dialing in his mindset, focusing on only what he could control.

It seems to be working. Going into Friday’s action in the high-A Northwest League, Schwecke was third in the loop in slugging percentage (.560) and eighth in on-base percentage (.390). He was hitting .280, with three home runs, eight runs batted in and 13 runs through 15 games for the C’s, the Toronto Blue Jays farm club that plays out of Nat Bailey Stadium.

Schwecke insists he’s changed more mentally than physically as a hitter from the guy who hit .205 with no homers and six RBI in 13 games with the C’s at the tail end of last season. The team was based out of Hillsboro, Ore., at the time due to travel restrictions brought about by the COVID-19 pandemic.

There were no minor league games in 2020 due to COVID-19 and Schwecke hit .231, with two homers and 23 RBI, in 61 games with Vancouver in 2019. The C’s were a short-season, single-A team then. They jumped two levels as part of the remake of the minors that took place ahead of last season.

“You grow up with baseball as a passion. You get to this level, and it’s a profession. We’re trying to make it our careers and it’s a business where nothing is guaranteed,” said Schwecke, whose team is finishes a six-game series at the Nat against the Everett AquaSox with a doubleheader Saturday afternoon and a single game Sunday afternoon.

“How can we reinvigorate that passion? I’m trying to take care of what I can take care of and leaving the rest alone.

It was an unusual injury. And the Blue Jays are bound to keep a close watch on Schwecke because of it. He was pulled from Wednesday’s game against Everett after one at-bat for what the C’s listed as precautionary reasons and wasn’t in the starting lineup on Friday. The fact that he was permitted to do interviews suggests it’s minor.

Schwecke is no stranger to having to battle for things. The 6-foot-1, 185-pounder from the Marshfield, Wis., didn’t get a single Div. I scholarship offer coming out of high school and earned a spot on the UW-Milwaukee team as a walk-on. His .322 batting average, with seven homers and 106 RBI, in 137 games over three seasons led to the Blue Jays selecting him in the 13th round of the 2019 amateur draft.

Schwecke is listed as a shortstop but he has played all over the infield, at school and in that first foray with the C’s in 2019. Prior to this season, the Blue Jays suggested adding outfield to his repertoire. Schwecke rolled with it.

Back in 2019, Schwecke joked about needing to borrow teammate Brett Wright’s trapper on days he was stationed at first base. Now he’s packing a first base glove, an infielder’s glove, and an outfielder’s glove wherever he goes.

Schwecke got outfield time at big-league spring training. He even belted a home run.

“I’m becoming more and more comfortable in the outfield,” said Schwecke, who has eight starts in right field, three in left, two at first base and one at both second and third for C’s manager Brent Lavallee to date. “I’m starting to get a feel for the routes I need to take, for when I need to be aggressive and when I need to layback.

Schwecke was an actuarial sciences and statistics major at UW-Milwaukee, and he’s only “five or six credits,” shy of his degree. He had arrived at the school with 38 credits already via advanced placement courses in high school. His biography on the UW-Milwaukee baseball website listed his career goals as working for a Fortune 500 company.