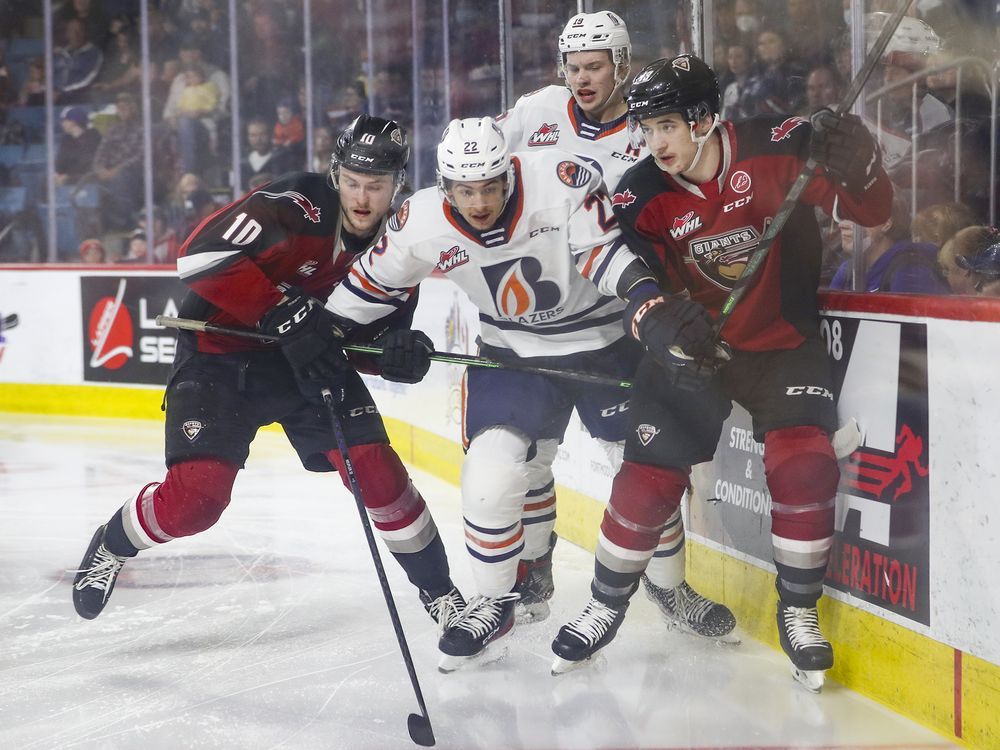 The Vancouver Giants’ power play was back in the shop Monday.

The Giants spent a chunk of Monday’s practice at the Langley Events Centre trying to get their man-advantage unit firing on all cylinders again, in preparation for Game 3 of their best-of-seven WHL Western Conference semifinal series against the Kamloops Blazers at the LEC on Tuesday.

It connected at 37.5 per cent (12-of-32) in Vancouver’s six-game first-round upset of the No. 1 Everett Silvertips. Vancouver’s power play had sputtered and stalled with regularity in the regular season, winding up 18th in the 22-team league at 17.7 per cent (43-of-243).

“I feel good about what we got done today,” Giants coach Michael Dyck said Monday of the power-play work, “but it’s all about how we perform tomorrow. At the end of the day, it’s about the results.

“We have to get connected here. There’s a different look on the PK and because of that we have to simplify things.”

Kamloops’ penalty kill doesn’t pressure the puck as much as Everett. At the same time, they’re less likely to get caught out of position.

With two-time Canadian world junior team netminder Dylan Garand leading the way, Kamloops has killed off 30 of 31 power plays (a 96.8 per cent success rate) in these playoffs so far. The Blazers swept the No. 7 Spokane Chiefs in the first round, outscoring them 23-3.

Simplifying things has been a familiar refrain from Dyck to his power play this year, too. Vancouver has some high-end, fancy talent, led by Boston Bruins prospect Fabian Lysell and Detroit Red Wings prospect Alex Cotton. There have been times when Vancouver has been far too cute with the puck for their own good, seemingly chasing the highlight-reel goal even though a rebound slotted home off a point shot counts exactly the same.

“Their PK is different than Everett’s. In the first series, we figured out what worked. Now we’re trying to figure out what works here. Today in practice we got some good reps in.”

Centre Zack Ostapchuk, who is regularly on Vancouver’s No. 1 power-play unit, believes that the Giants need to do a better job of getting to rebounds and retrieving pucks back after that initial chance. They need to cut out the “one and dones,” Ostapchuk maintains, pointing to Kamloops firing the puck down the ice after a single Vancouver shot.

“And I think we have to get pucks through. I didn’t think we did a great job of that. They blocked a lot of shots and we were missing the net,” added Ostapchuk, an Ottawa Senators prospect.

Vancouver had a two-man power play for 1:47 to start the third period with the scoreline 4-3 in Kamloops’ favour, but that was cut into when Giants centre Ty Thorpe was assessed a checking to the head minor penalty at 1:03 of the stanza.

“The first game it was good,” Dyck said of Vancouver’s discipline, “but the second game not so much.”

The Blazers killed off 87.5 per cent (five goals against, 40 opportunities) of Vancouver’s power plays in the teams’ 12-game regular season series. Kamloops was 10-1-1-0 in league play against Vancouver in league play.