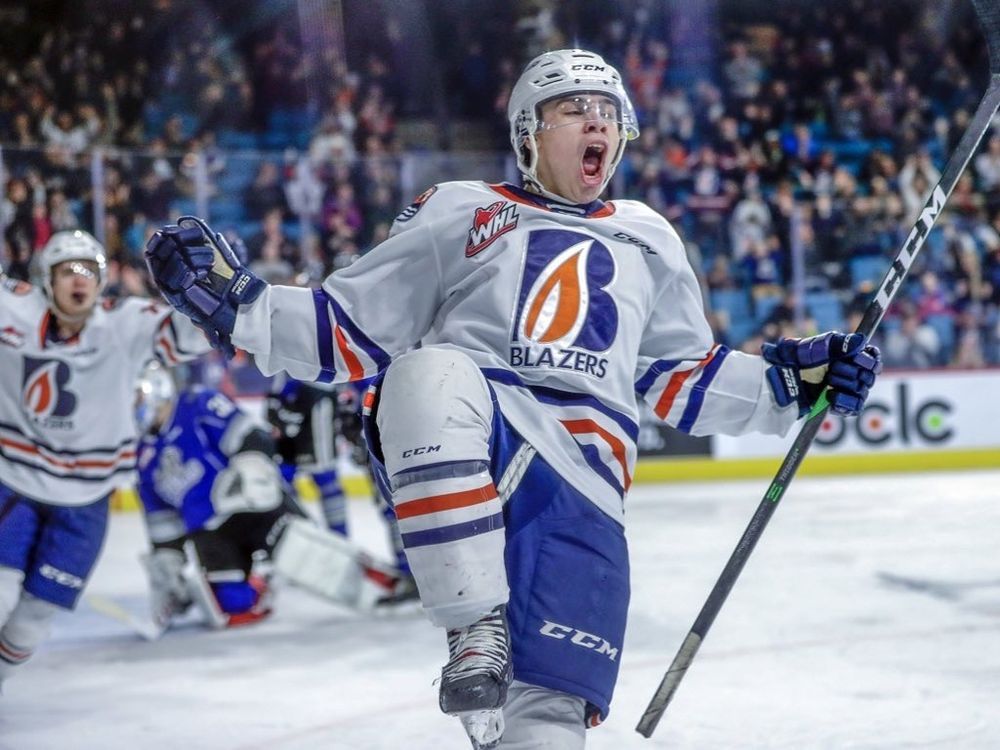 The Vancouver Giants and the Kamloops Blazers begin their best-of-seven Western Conference semifinal Friday at the Sandman Centre in Kamloops.

Here are five things to know about the series:

The Blazers are a combined 107-39-6-1 over the last three WHL regular seasons. Because of COVID-19, that’s only parlayed into last week’s first-round sweep of the Spokane Chiefs as far as playoff success goes.

The 2019-20 season was shut down with a couple of weeks left in the regular season. Kamloops had already clinched the B.C. Division title and No. 2 seed for the first post-season round with a 41-18-3-1 record. They were atop the B.C. Division standings with an 18-4-0-0 mark in last spring’s abbreviated hub season.

The four-game sweep of Spokane last week, which Kamloops won by a combined score of 23-3, was the Blazers’ first playoff series victory since they made the Western Conference finale in 2013. Forward Logan Stankoven had seven goals and 13 points in the four games.

Stankoven, the Dallas Stars’ prospect who’s originally from Kamloops, had nine goals and 20 points in 12 regular-season games against the Giants this year. Kamloops went 10-1-1-0 versus Vancouver (24-39-5-0), the No. 8 seed who surprised the No. 1 Everett Silvertips in six games to advance to meet Kamloops. Everett finished one point ahead of No. 2 Kamloops.

The Blazers have made a bid to host the 2023 Memorial Cup national championship, and a decision should be coming sometime this month.

Blazers owner Tom Gaglardi told Radio NL recently: “The City of Kamloops is engaged and so far, the city has been fantastic. They’re walking-the-talk in terms of how badly they want to see the Memorial Cup return. Everybody in the organization has their fingers and toes crossed that we’re going to win this thing, and we’ll stay with it. The conversations are productive. They’re positive, and so we’re hoping for a great outcome.”

The Blazers have a relatively young team. Their playoff roster has seven players in their 19-year-old season. Vancouver’s, by contrast, has 10.

The 2023 Memorial Cup is slated to go to a WHL host. The Blazers are the only ones who have been public about being interested, though. The Kelowna Rockets beat out the Blazers and the Lethbridge Hurricanes for the 2020 Cup host bid, but that tournament was cancelled due to COVID.

GIANTS COACHES HAVE HISTORY WITH BLAZERS

The Giants and the Blazers both had openings for head coaches ahead of the 2018-19 season, and Michael Dyck interviewed for both jobs. According to the rumour mill, Dyck was the top choice for both clubs and picked Vancouver, where he had been an assistant coach previously.

Kamloops went with former University of Alberta Golden Bears bench boss Serge Lajoie and he lasted a single season, with the coach and the team mutually parting ways according to a Blazer news release after a 28-32-6-2 regular season and a first-round playoff loss to the Victoria Royals.

Kamloops brought in former Medicine Hat Tigers coach Shaun Clouston that off-season and he’s been at the helm ever since.

Vancouver’s associate coach, Keith McCambridge, has a tie to the Blazers as well. A tough-as-nails defenceman in his day, McCambridge was a midseason pickup by the Blazers in 1994-95 in a trade with the Swift Current Broncos, and went on to help the Blazers win the Cup on Kamloops’ ice that spring.

Former Giants defenceman Marko Stacha was shut down by the Blazers in early April with a recurring upper-body injury that started when he was with Slovakia at the World Juniors.

Stacha, who turned 20 in March, didn’t play in January or February for the Blazers and got into six games with Kamloops in March before he went back to the sidelines. He had five goals, 10 points and a plus-17 rating in 30 regular-season games with the Blazers this season.

Stacha, a 2020 second-round CHL Import Draft pick by the Giants, opted to stay in North America after last year’s world junior tournament and played all 22 games with Vancouver in the 2020-21 B.C. hub season.

When Swedish winger Fabian Lysell and goalie Jesper Vikman both agreed to join the Giants this season, Vancouver needed to get down to two Euros and opted to trade Stacha. They dealt him to Kamloops on Sept. 30 and got a 2023 WHL Draft fifth-round choice in return.

Four Blazers and one Giant were named to the NHL Central Scouting final draft ratings on Thursday. Kamloops forward Fraser Minten (No. 28); defenceman Mats Lindgren (No. 47); forward Matthew Seminoff (No. 72); and Giants winger Justin Lies (No. 210) made the North American skaters’ list, while Blazer netminder Dylan Ernst (No. 30) made the North American goalies’ list.