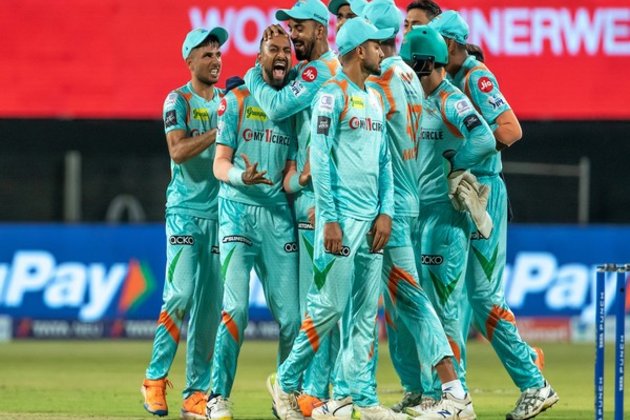 Pune (Maharashtra) [India], April 30 (ANI): Lucknow Super Giants beat Punjab Kings by 20 runs here at Maharashtra Cricket Association Stadium on Friday to register their sixth win in nine matches. But despite the victory LSG captain KL Rahul is not happy with the batting performance of his side as his team at one stage was 98/1 crumbled to 126/7.

“I was fuming after the first innings because it was stupid cricket with the bat, the experienced guys in the team. It does happen but we did talk about it at the timeout that it’s a tricky pitch but 160 is something we can put on the board. But a couple of bad shots and the runout didn’t help. I was unhappy with that middle phase but this game has been completely about the bowlers,” said Lucknow Super Giants captain KL Rahul in the post-match presentation ceremony.

“The way they scored those crucial 25-30 runs at the back end and then the way they bowled throughout the 20 overs was brilliant. They executed their plans to perfection and they held their nerve. They were brave with the bat and ball, so really happy with the way we played as a team but batting unit I think we need to go back and get better,” said KL Rahul.

After KL Rahul’s early dismissal Quinton de Kock’s played a 46-run knock and Deepak Hooda’s scored a 34-run knock. The duo struck 85 runs for the second wicket but none of them went on to play a big knock to take Lucknow to a big total. “We felt we did well to get to 60 in nine overs and paced it really well then after that timeout, they got going and were hitting boundaries. It was a tricky pitch and we knew it was not a 180-190 wicket. If one of the top 3 had continued and gotten a 70 or 80, we probably would have got 10 or 15 runs extra, but that didn’t happen and we lost four or five wickets in the space of three or four overs and that pushed us back a little bit. But the way we responded with the ball was phenomenal,” explained KL Rahul.

All-rounder Krunal Pandya was brilliant with the ball picking up two wickets for 11 runs in four overs. He also picked wickets of Bhanuka Rajapaksa and Jitesh Sharma and earned the ‘Player of the Match’ award.

“He’s been brilliant throughout the tournament and he’s someone who’s… he’s always been an economical bowler every other IPL season but I think this season he’s really worked on his bowling and is getting us those crucial wickets in the middle which is what teams need. You need to take wickets in the middle so you can put pressure on the batters,” said KL Rahul.

Leg spinner Ravi Bishnoi conceded 41 runs in four overs but he got the prized scalp of Shikhar Dhawan and his captain KL Rahul has backed him to pick up wickets no matter how runs he concedes in doing so.

“Yes, bowling economically is also important but if we’re getting two or three wickets in the middle overs, that really puts pressure on the opposition and that is what he’s been doing brilliantly. Bishnoi keeps getting those crucial wickets again and he is an aggressive bowler. We don’t mind him tossing the ball up or trying to look for a wicket and getting hit for sixes. That’s fine, that’s okay with us,” said KL Rahul.

The spinners in this match have played a crucial role they have not only picked up wickets but they have also bowled economically to put batters under pressure.

“Spinners have been brilliant but also the fast bowlers have been exceptional the last two or three games. The way they have bowled at the death, the way they have started in the Powerplay has been really really good and that will give us a lot of confidence as a team,” said KL Rahul. (ANI)