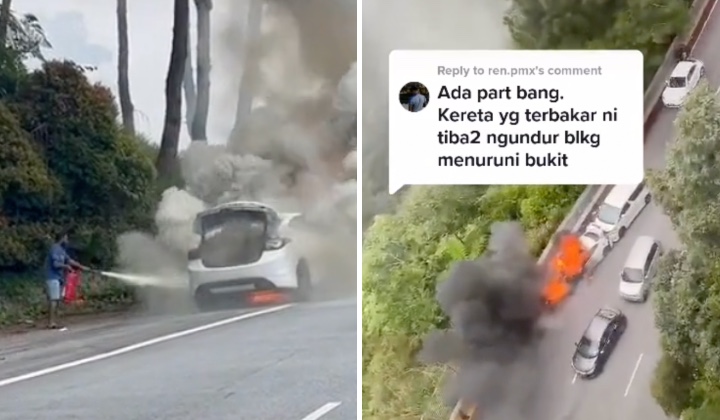 When onlookers called out warnings on a car blaze until help arrives, nothing seemed out of the ordinary.

But the precarious positioning of the vehicle, on a sloping road heading up to Genting Highlands, soon caused problems.

The brake of the car failed to work and started moving backwards, picking up speed as it went downhill.

Without warning, the vehicle started rolling down the road while still on fire.

Footage of the incident was filmed by passersby including from a passing cable car above.

The onlookers, who looked like auxiliary cops from a distance, can be seen desperately trying to avoid the burning wreck by moving away.

But as they withdrew, the car picks up speed and starts to roll down towards other vehicles down the road.

It collided with what appeared to be a Toyota Vellfire.

It is not immediately clear whether other road users were injured as a result of the collision.

The car then crashes into the road shoulder and fortunately, it stopped rolling downhill.

The footage had since gone viral with more than 1.2 million views in just 8 hours.

It was uploaded by TikTok user @ren.pmx and incredulous viewers soon started commenting.

Others praise the passerby for their videography skills, while some questioned the response time of the fire and rescue department.

Other passersby also recorded the incident and uploaded it to social media.

At the same time, netizens speculated that it looked like a Korean car which had been recalled by its manufacturer for fire risk.

What To Do If You See A Car On Fire?

Get yourself and all others out of and away from the vehicle.

If the vehicle is in a garage or other structure, exit immediately.

After you are a safe distance from the vehicle, call the fire department at 911 or the local emergency telephone number.

Tell them the location of the fire.

Do not try to put out a big fire yourself as the fuel tank may explode.