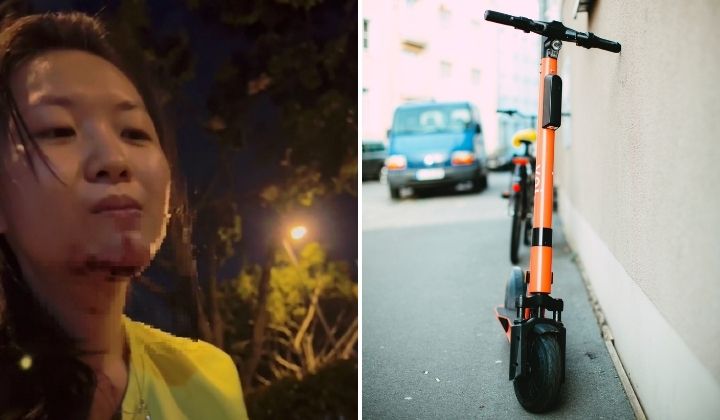 It’s fairly easy to find e-scooters in the cities now for quick modes of transport or for recreation. However, people should take the same caution while riding an e-scooter, just like they would when they ride bicycles or skateboard on the road.

A Malaysian woman named Kiwi shared her horrifying accident when she rode an e-scooter in Cyberjaya on 20 March with family and friends.

It wasn’t her first time riding the e-scooter. However, she lost control of the e-scooter and was thrown off when she swerved at a curve.

At first, she didn’t feel anything but realised she was dripping blood from her chin. That was when she knew she was in serious trouble.

Her family and friends rushed to her side and tried to apply pressure on the bleeding with tissues and plasters. She was quickly sent to Hospital Putrajaya on the same night.

At the hospital, she was bandaged but had to wait about 7 hours before the doctors attended to her. They recommended she undergoes surgery because the scans showed that her jaw was shattered.

Unfortunately, the next available date was only next Tuesday, 29 March. For the whole night, she couldn’t eat, drink or talk.

After returning to Hospital Putrajaya the next day (22 March), her mother decided that having the surgery done at a private hospital would be quicker.

The doctor at the private hospital asked why she came so late because her injury was severe. They scheduled her for surgery that evening right away.

The surgery was estimated to take 3 hours but it lasted for 5 hours because her injury was more severe than initially thought.

Her jaw was shattered, and they had to install metal plates while waiting for the jawbones to grow back. The doctors also put in what looked like dental splints in her mouth.

Kiwi is still recovering from the surgery two weeks later. In the video, she shared that her jaw is still swollen but her chin is numb.

She advised everyone to be careful while riding e-scooters and maybe put on safety gear like a helmet and arm guards.

We hope that she’ll recover soon without any complications.