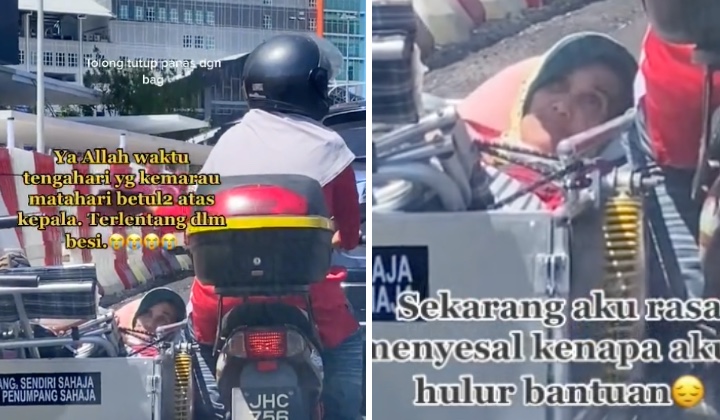 A heartbreaking video of an elderly woman sitting in a three-wheeled motorcycle for the disabled had recently gone viral.

In the incident which is said to happen in Kuala Terengganu, the elderly woman was with her daughter who was riding the bike.

The sight of the helpless old lady as she laid there under the scorching heat of the sun moved the hearts of netizens.

The scene was posted on social media by TikTok user @shihanizam.

The posting attracted numerous reactions, with most netizens saying they were touched by the plight of the old lady.

They also commended the young woman riding the bike – presumably her daughter – for doing her best to look after the elderly.

The post had garnered over 2.1 million views reactions in less than 24 hours after it appeared on TikTok.

@shanizam wrote that the old lady’s situation made her realise that there are many others who live a difficult life out there.

Her comment made other netizens tear up and in response, they offered to help if anyone can identify the old lady.

Some even tagged well-known generous preacher, Ebit Lew, with the hope that he can lend a hand.