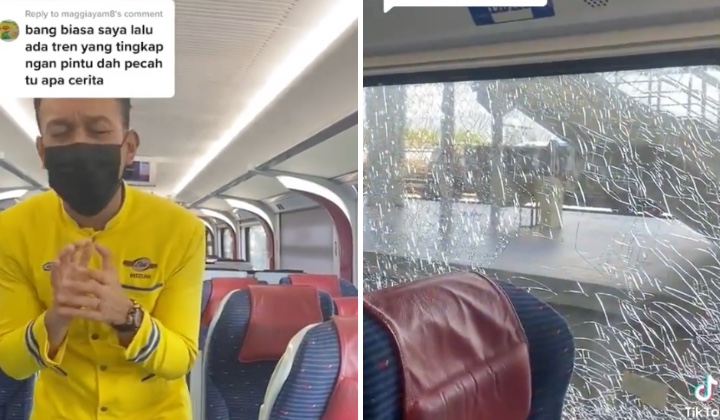 The issue of public transport is one of the issues that are often debated in this country.

From buses, taxis to trains including LRT, Monorail and KTM, there are always concerns.

It is undeniable that there are still many weaknesses in the public transport system but in many cases, transport providers have tried their best to serve the passengers.

Whenever a problem arises, people are quick to point fingers.

But the fact is, some problems arise because of the public themselves. At times, the issues are no small matter and something needs to be done.

Among the problems often faced by KTM in particular is the mindless stone-throwing at moving trains.

Parents have been told to control their children who take it as a game on a daily basis.

A TikTok user, @redzuanmanaf87, who is also a KTM conductor, made his plea to the public through social media.

His TikTok video was also in response to questions from the public on why the train’s windows and doors were broken.

The train conductor, who calls himself ‘Pak Su’, said KTM has to replace broken window glass every now and then.

Pak Su asks for your help to advise your children and your neighbors not to throw stones at Pak Su’s train. Please. Have pity on the people on the train. Pity us all.

As it is, this issue is not a new issue.

Keretapi Tanah Melayu Berhad (KTMB) incurred losses of more than RM6 million in 2016 due to vandalism.

It had to cover the cost of replacing about 1,300 units of its commuter coach windows that were broken due to vandalism.

According to KTMB’s Corporate Communications Manager at the time, Siti Badariah Wan Hanafi, the act of throwing stones did not cause injuries to passengers.

However, this has caused commuter travel operations to be sometimes disrupted.

If the damage to the windows is severe, KTM have to detain the coach involved for the purpose of changing the mirrors for the safety of consumers.