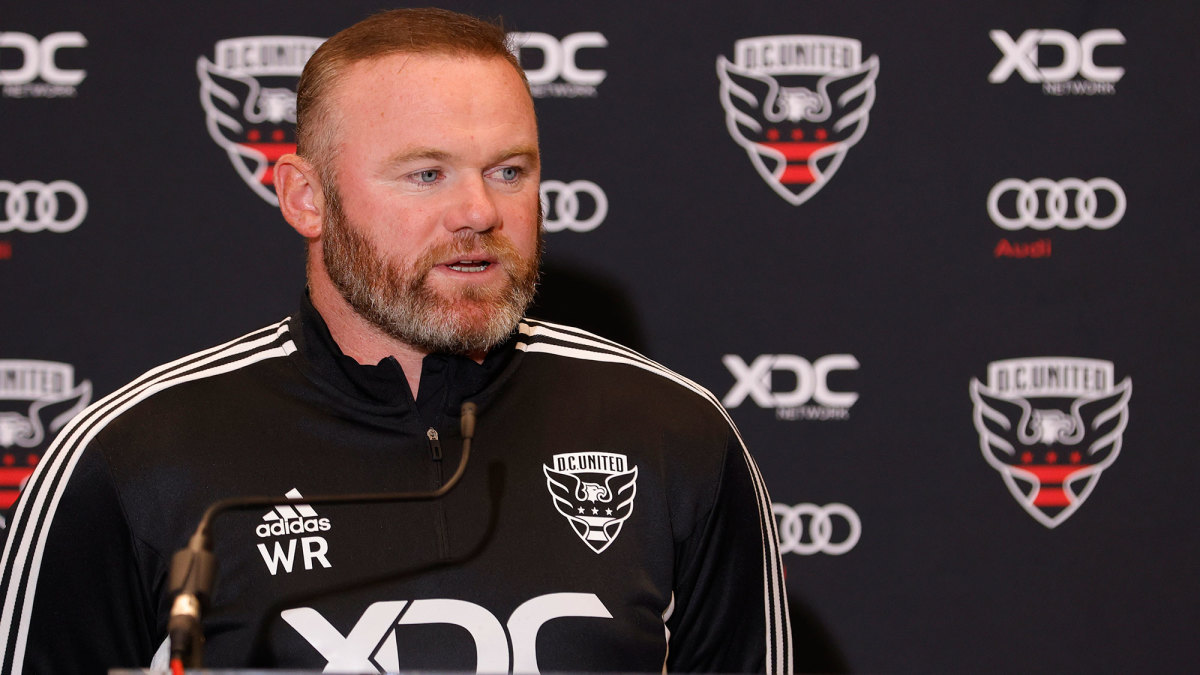 WASHINGTON — Wayne Rooney made his initial impression on the nation’s capital during a fun and productive spell toward the end of his decorated playing career. That was in 2018–19. But Washington made an impression on Rooney several years earlier. It was ’11, and Manchester United was in town to play Barcelona in one of those high-profile, money-spinning friendlies that players typically believe are a waste of time and energy.

Rooney got something out of his visit, however. A seed was planted during a stroll with teammates Danny Welbeck and Tom Cleverley.

“We had a walk around Georgetown and I remember thinking, ‘I could live here,’” Rooney said Tuesday.

“Then I came over as a player and I enjoyed my time here in the city,” he told Sports Illustrated. “Obviously I think it was well documented that my wife had a tough time in looking after four children away from home. She’d never been away from home. It was tough. But I enjoyed the club and the city.”

Rooney prioritized family. He left United before his contract expired, finished his on-field career at Derby County and then transitioned into management, where he won acclaim for his work at a club struggling under financial duress. But while he was gone, he didn’t forget. Where there had been a seed, now there were roots. Rooney maintained his connection to D.C., staying in touch with owner Jason Levien, among others, and nurturing friendships with people like team administrator Rory Molleda and captain Steve Birnbaum.

“In football you stay in touch with people. Last December, Steve visited me and my wife back in Manchester, with his wife. So it’s part of my life,” Rooney said.

And so Rooney’s decision to return to the U.S. to manage D.C. United—he was unveiled as the club’s ninth head coach Tuesday afternoon here at Audi Field—was somehow both surprising and fitting. His memories and affection for the club and city were enough to entice him away from England, absent his family, and enough to look past the squad’s current struggles. He was a free agent following his resignation from Derby, which was relegated because of a steep points deduction. At 36, he knew his next job would be about accumulating additional experience and credentials. So he chose a place that would present its fair share of challenges, along with a bit of comfort.

“I think he really enjoyed his experience here. I got the sense that maybe there’s a little bit of unfinished business with him,” DCU sporting director Dave Kasper said.

“I think he felt at home here, and I think that played a big part in his desire to come back, because look, there’s going to be no shortage of options for Wayne. If he hung in there, maybe in the next week, two weeks, two months, he’s going get a job offer there,” Kasper added. “It’s pretty flattering that he wants to come back here and continue his journey as a coach, because we know his ultimate goal is to coach in the Premiership.”

Rooney won’t be eligible to work directly with the team until he receives his work visa, which Kasper said could take three or four weeks. Rooney, who once helped train D.C. youth teams while earning his English coaching certification, will work on player evaluation and recruitment in the meantime. United, now 13th in MLS’s Eastern Conference, hosts the Columbus Crew on Wednesday before visiting Minnesota United this weekend. Interim coach Chad Ashton, a longtime DCU assistant, will remain on the bench.

“The first order businesses is to jumpstart the team, the culture, the organization, and to start rebuilding to get the team back to really where it needs to be,” Kasper said. “He alone, yesterday, had 10–12 calls from people—players asking him to come. So he’s going to help there.”

Cleverley, who spent the past several seasons with Watford, was among them. That must have been a glorious walk through Georgetown.

Rooney is alone this time, and he’ll be living out near DCU’s new training facility in exurban Loudoun Country. His wife and sons, two of whom are Manchester United academy players, will visit on occasion, and Rooney will have time during MLS’s lengthy offseason to head back to England. His contract runs through 2024 and includes a club option year, according to The Washington Post.

“My days are longer, obviously longer hours as a manager. I really want to develop myself as a coach, and I feel it was the right time, the right opportunity for me to come back here. MLS is a tough league to play in, and I’m anticipating it’s an even tougher league to manage in.” Rooney said, adding that his family is more settled with this new arrangement.

“Of course there’s no issue. I speak to my wife about decisions like this, of course, and there’s no problem whatsoever. I think she’s glad to get rid of me,” he joked.

So the questions will revolve around whether Rooney, a young manager, can succeed at a club that’s been floundering (D.C. is among the third quartile of MLS spenders but hasn’t won a playoff game since 2015), and then whether anything he achieves will be respected back home.

On the first front, he said he received the assurances he needed from DCU ownership.

“Obviously once D.C. got in touch, I asked a lot of questions of course—as you can imagine. I asked questions on the team, on the staff, on the club—where it’s all at,” Rooney said. “And of course we spoke about players I potentially want to bring in—what’s available for me to use to bring players in. And I got the right answers. If I didn’t get the right answers. I wouldn’t be here.

“We’ve got targets. Obviously we’re speaking to players and we’re working at it to make sure we can try to get them over the line,” he added.

Earning credit for his work back in England likely will be a longer conversation. Although several foreign coaches have successfully used MLS as a launch pad—Patrick Vieira heading from New York City FC to Nice and then to Crystal Palace comes immediately to mind—widespread acceptance remains a challenge.

“I’ve seen that over the last couple of days, actually, back in England. People are asking why I’ve come back to MLS. ‘Is it a backward step?’ I personally think that’s just a lack of respect for MLS,” Rooney said, adding that he sees MLS as occupying a space somewhere between the Championship and Premier League.

“Being here as a player, I know how tough the league is,” he continued. “I always think people who are willing to take risks and take gambles get bigger rewards. I think there’s a lot of managers who won’t move out of England. Maybe that’s their own stubbornness or whatever. I want to learn, whether that’s in England, whether that’s in Europe, or in MLS. I’m always wanting to learn to develop myself as a manager.”