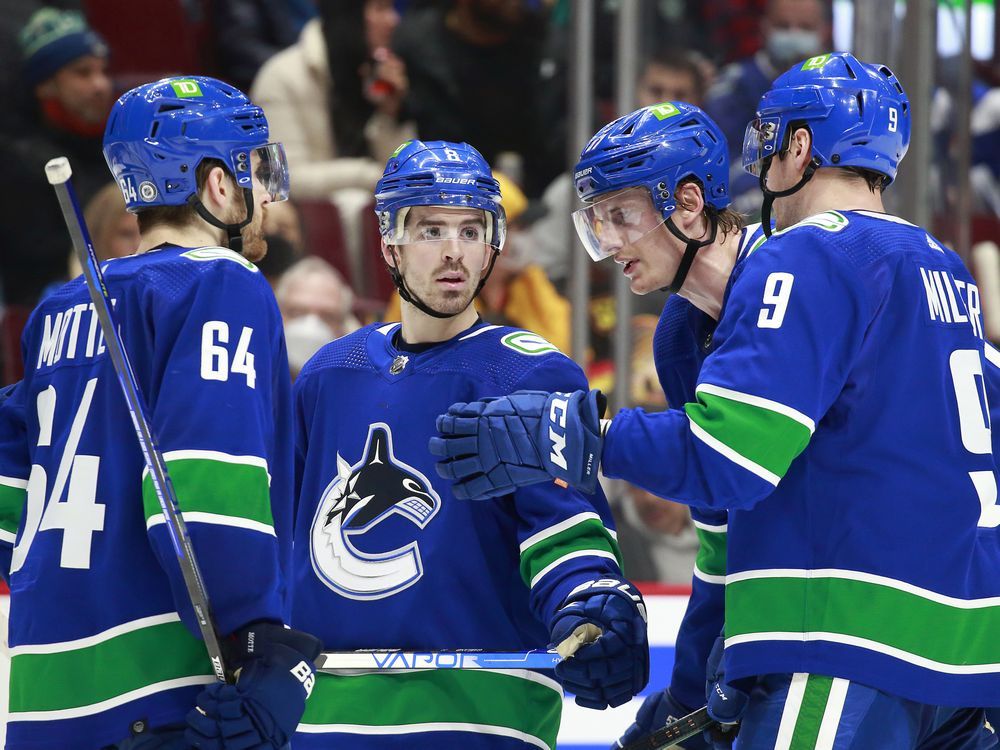 The Vancouver Canucks head into the weekend with two must-win games against the Calgary Flames and the Buffalo Sabres.

They are the final two games of a seven-game home stand, a stretch in which they needed to get at least 10 points to truly retain a chance at the NHL playoffs.

Even if they had kept up that pace, they needed things to happen in their favour, like the Vegas Golden Knights losing five straight — which they did — and the Dallas Stars and Edmonton Oilers continuing to slump, which neither team did. Both have gone 6-3-1 in their last 10 games.

As it stands, the Canucks are 2-2-1 on their current home stand for just five points. Wins over Calgary and Buffalo would make for a solid 4-2-1 record and nine points in those seven games, but with 18 games left to play they would still be on a knife’s edge.

Because of the points they’ll need to make the playoffs — almost certainly at least 95, probably more like 96 because of tiebreakers — the Canucks can’t afford to lose more than six games the rest of the season.

HockeyViz.com currently rates the Canucks’ chance of making the playoffs at 18.3 per cent. That fell 10.5 percentage points after Thursday’s 1-0 loss to Red Wings, coupled with wins for their divisional rivals.

The Canucks’ playoff chances are not impossible, but they remain the same long-shot they were a month ago. A regulation loss Saturday to the Flames would knock their chances down a further six per cent.

A Vancouver win, on the other hand, would bump their chances back above 20 per cent.

Which brings us to a look at Monday’s NHL trade deadline.

As things stand it seems unlikely the Canucks will make a big trade before the deadline, but one or two smaller moves still seem possible.

J.T. Miller is the big trade chip. He’s playing the best hockey of his career and would add immensely to a contender’s offensive depth. But with the Canucks still in with a hope, it’s clear that ownership’s preference is to keep the lineup as competitive as possible down the stretch in order to keep fans engaged and perhaps even have the team in a position to sneak into the playoffs, where there are big profits to be made.

Unless there’s a drastic shift, it seems clear he’ll be a Vancouver Canuck into the summer.

There’s some interest in Conor Garland, with the Los Angeles Kings said to be the latest. But at least two teams from the Eastern Conference — New Jersey and perhaps Boston or Toronto — have also expressed interest.

No Canuck has more shots on goal than the 156 fired by the feisty winger, who the Canucks picked up from Arizona last summer in the Oliver Ekman-Larsson trade. He’s drawn 28 penalties this season, 10th-best in the NHL. And he’s signed to a contract at a shade under US$5 million per season for four more years, a very manageable cap hit.

But it has been reported that potential trade partners are balking at the Canucks’ apparent asking price of a first-round pick.

If any trade is to happen, it will likely involve Tyler Motte, who plays a high-energy game and is an adept penalty killer. The Toronto Maple Leafs are believed to be interested in the hustling winger, who is set to be an unrestricted free agent this summer.

He’s surely looking for a raise on his US$1,225,000 deal, but as Canucks fans well know, even if he’s a fan favourite, overspending on third and fourth liners is something to be wary of.

The Canucks could also move a defenceman.

“They have three of the same guys,” one scout told Postmedia, in reference to Luke Schenn, Travis Hamonic and Tucker Poolman. The Canucks should look to move at least one as they move to makeover the roster’s composition. All three are considered defensive-oriented blueliners and Schenn and Hamonic, at least, are able puckhandlers and play with an edge that playoff-bound teams will love.

Schenn has been far more consistent this season and of the three is of most interest to other teams because of his low contract — US$850,000 for one more year compared to US$3 million for another year for Hamonic and US$2.5 million for three more years for Poolman — and his history of being a solid teammate.

Backup goaltender Jaroslav Halák hasn’t played nearly as much as he probably thought he would and is likely to agree to a trade. But Halák’s contract could be an issue. Halák was due a performance bonus at 10 starts and the impending free agent’s cap hit is now US$2.75 million because of that bonus.

While trading Halák would create true cap relief for the Canucks, it is understandable if other teams aren’t springing to bring in the veteran goalie, who has posted the worst save percentage (.833) of his career this season.

Finally, there’s Brock Boeser. He didn’t say so directly, but it was evident in head coach Bruce Boudreau’s comments after Thursday’s loss that he’s frustrated with the fifth-year winger.

Boeser has developed into a solid two-way winger, with 17 goals and 35 points this year, but there are still moments of inconsistency in how he works on the power play and around the edges of his game. He’s due a US$7.5 million qualifying offer this summer as a restricted free agent but it’s hard to imagine other teams seeing him worth that salary.

Trading Boeser isn’t as straightforward as it might seem as any team trading for him will want a sense of what he and his representatives would be looking for in a longer-term contract.

It will require giving up a forward like Boeser in a trade if the Canucks are going to find the up-and-coming defenceman they desire.