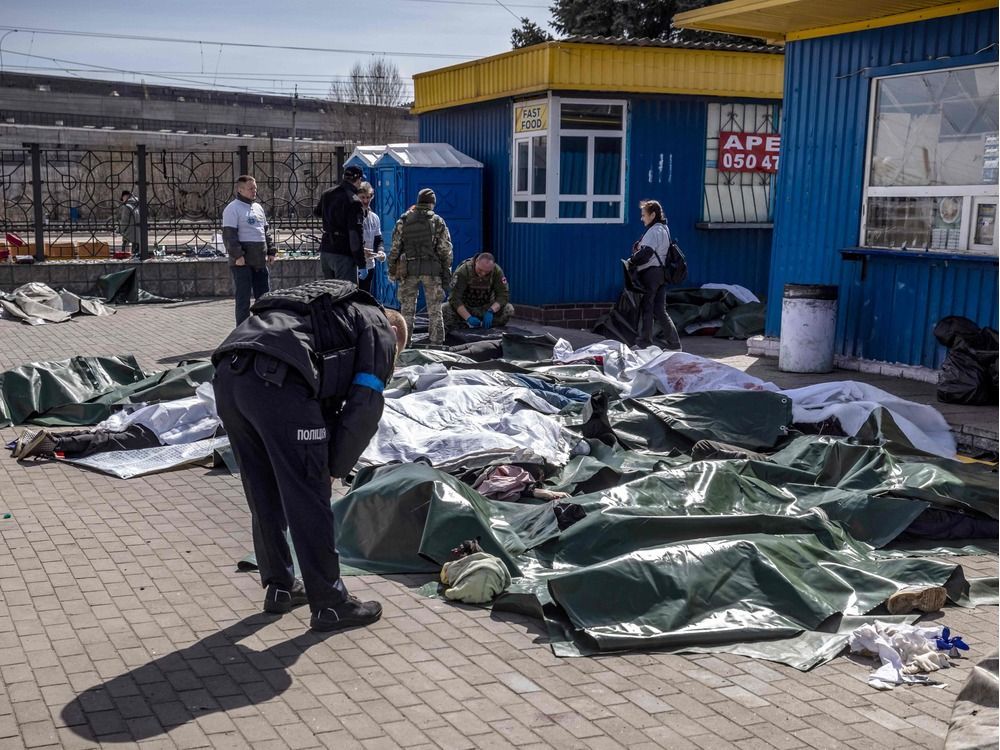 Earlier this week, Montreal emergency physician Dr. Joanne Liu was in Kramatorsk, Ukraine, helping to load patients onto a medical train that would bring them to hospitals in the western part of the country with Médecins sans frontières.

On Friday, the world was shocked to learn that a Russian missile hit the city’s train station while thousands of people waited to leave in anticipation of a military strike next week. The attack reportedly killed at least 50 people and injured dozens of others, causing mounting pressure on the city’s hospital.

“We’re still under shock,” Liu told the Montreal Gazette on Friday. “Two days and three days ago, I was there evacuating patients. And I knew exactly where it was, I knew exactly the site, I knew the people in the railway station who were working there — so it’s been a tough day.”

The Médecins sans frontières effort to take patients from eastern Ukraine by train, which began last week and is a first for the organization, aims to reduce hospital capacity in areas targeted by the Russian invasion and to ensure safer care for the sick and injured. Medical staff on board provide basic care to patients stable enough to withstand a transfer spanning 20 to 30 hours. In about two weeks, a train dedicated to intensive-care patients will join the fleet.

Liu — a former international president of Médecins sans frontières who works at Ste-Justine Hospital and teaches at McGill University — said patients being sent west are a mix of those injured in the war and people who are ill. That includes patients with conditions affecting their mobility, making it impossible for them to take cover in the basement when an hour-long air siren goes off, which can be as often as three to four times per day.

One patient in particular stood out to Liu, who has been assessing and co-ordinating which ones will be sent west in collaboration with their physicians. It was a child who fled Mariupol and was hit by shrapnel. The extent of his injuries, which included open fractures to all four limbs, made Liu’s team hesitant to transfer him.

“I remember discussing with the ICU doctor, and then I was discussing with the mother and then she just said … ‘My child needs to be transferred. … He needs to keep his legs,’ ” Liu said. “And then I turned towards the child, and I looked at him with an inquiring face, and he looked at me and said: ‘I want to walk. I want to walk again.’ And then the ICU doctor looked at me, and he said: ‘You have to take that child. He’s our hope. He survived to flee Mariupol; he needs to keep his legs. He needs to survive.’ ”

After discussing with her team, an agreement was made to send the child across the country with his ICU nurse from the hospital. The last Liu heard, he was taken to a children’s hospital in Lviv and later to Germany.

“And so it’s a happy ending,” Liu said. “And the thing is, every day I’m basically humbled by the courage and the resilience of Ukrainians.”

Aside from the constant air sirens signalling an aerial threat, the resilience of Ukrainians is what has stood out most to Liu during her time in the country, which has spanned nearly three weeks. She said she can’t compare her time in Ukraine with other crisis situations she has witnessed — they’re all very different — but that the stoicism in Ukraine has struck her.

“Over the last few days, there were general calls for evacuation from the eastern provinces,” she said. “And just to see people hopping in their car, packing up and then lining up … to get food at the market, lining up to get money before going, lining up to get fuel — and then when you say line up, it’s like we’re talking about dozens and dozens and dozens of cars line up and they wait for hours to get 20 litres of gasoline to get moving. And it’s all done in an orderly way — no one’s jumping the line — and I’m just like, ‘Wow, that’s impressive.’ ”

It’s imperative that Ukrainians know they have the attention and support of people around the world, Liu said.

“That’s what made them keep going,” she said. “So that’s why we need to talk about it. But as Canadians per se, and knowing what has been the public stance of our government in terms of welcoming Ukrainians, we need to make it happen. … We need to live up to our promises for Ukraine.”

Liu added she hopes Ukrainians who have applied for the Canada-Ukraine Authorization for Emergency Travel won’t face any red tape. As of Friday, 119,409 applications had been received, 31,895 of which had been approved so far.