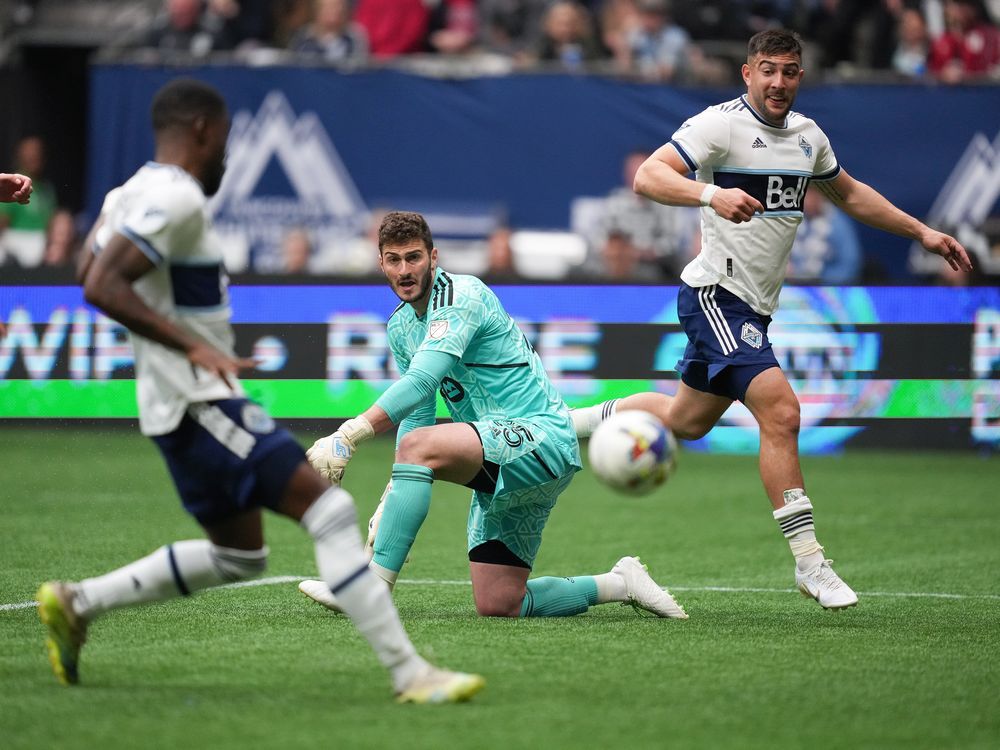 The Vancouver Whitecaps played like a bunch of Mothers on Sunday.

“I said to the players after the game that the way you have played today, it’s like a bunch of mothers,” said head coach Vanni Sartini. “Mothers care, mothers fight for their kids, they’re tough, and they need to be tough. So I’m really happy that they showed on the field that we played like a bunch of mothers.

“Like the best mother, my mama,” he concluded, just a few minutes after talking with his parents on FaceTime.

And mothers don’t give up, as it took until the 90th minute for the Caps to finally break through, and it came off the boot of substitute striker Tosaint Ricketts, slamming home the winner in a 1-0 decision over Toronto FC at B.C. Place.

He was robbed of a game-tying goal in the dying minutes against Montreal, on Sunday he stole three points for the Whitecaps on Mother’s Day.

Ricketts’ first goal of the year sent Toronto (3-6-2) to its fourth straight loss, while ending the Caps’ (2-6-1) own three-game skid.

To say this stretch of games is gargantuan in the Caps’ season would be underselling it. Aside from Wednesday’s Canadian Championship game against Valour, the Caps have three league home games, and anything short of six points from them and it feels like you could put pennies on the eyes of their playoff chances.

The first half was a mostly uninspired performance that one German member of the local media, watching from afar, deemed “Langweilig” and went back to eating bratwurst.

Vancouver had just 41 per cent possession and a pass completion of 79 per cent, but did have the two best scoring chances of the half, both of which forced big saves from Toronto’s Alex Bono.

The game opened up in the second half, and brought the announced crowd of 17,709 in the stadium to their feet when Ricketts’ wounded the winner home.

Toronto’s best scoring chance in the first half came after Ranko Veselinović was whistled for a handball. Referee Victor Rivas initially missed the call until video referee Malik Badawi alerted him to the infraction.

Alejandro Pozuelo had been admonishing Hasal for what he’d deemed simulation, and their conversation continued right up until the Toronto designated player took the kick.

Pozuelo’s effort, a weak strike that only a mother could love, was ‘sMothered’ by Hasal to keep the game scoreless.

It looked like Pozuelo had gotten his revenge in the 70th minute, when Jayden Nelson banged home a rebound off a Pozuelo shot that Hasal had spilled, but Rivas waved it off for an apparent foul. On replay, the decision seemed as offensive as a bad Yo Momma joke.

“The system failed. You can have a system but if the person responsible in that moment can’t see that, then then the system doesn’t work. So we’ll see what PRO has to say about it. But for me, it’s a clear mistake.”

Hasal left the game with a hand injury, and was replaced by Cody Cropper, who made a game-saving stop on a looping header to the far post just seconds after coming on.

Hasal has had bad luck with injuries, breaking his leg and suffering a concussion in 2020, costing him 12 games that year. Sartini said Hasal’s status isn’t clear yet, but he had a splint on one of the fingers on his left hand.

5: The number of times the Whitecaps have outshot their opponent this year. They held a 15-9 advantage, and 6-4 on target. It’s a surprising stat considering they came into the game last in the league in shots (86, tied with TFC) and shots on target. They also held a 1.8-1.3 expected goals (xG) advantage.

4: The Whitecaps played with a back four for the first time this season, and first time since 45 minutes had elapsed in Sartini’s first game in charge last year. The formation switch saw them defend in a 4-2-2-2, and attack in a “3 1/2,” as Sartini put it. Fullback Javain Brown would get high on the right side, allowing Ryan Gauld to move inside as a No. 10, turning the formation essentially into a 3-4-1-2. They’ll roll it out against Valour and San Jose.

It’s a short week for Vancouver, who host Canadian Premier League side Valour FC on Wednesday night in their first Canadian Championship game of the season.

Valour (1-1-2) are currently sixth in the standings, playing to a scoreless tie in their last game out.

That game is as massive as next Saturday’s game against San Jose, who are two points up on Vancouver.

“(Wednesday’s game) is very important … because there is no appeal. Let me be clear: Wednesday is the most important game of the year,” Sartini said of the do-or-die game against Valour.