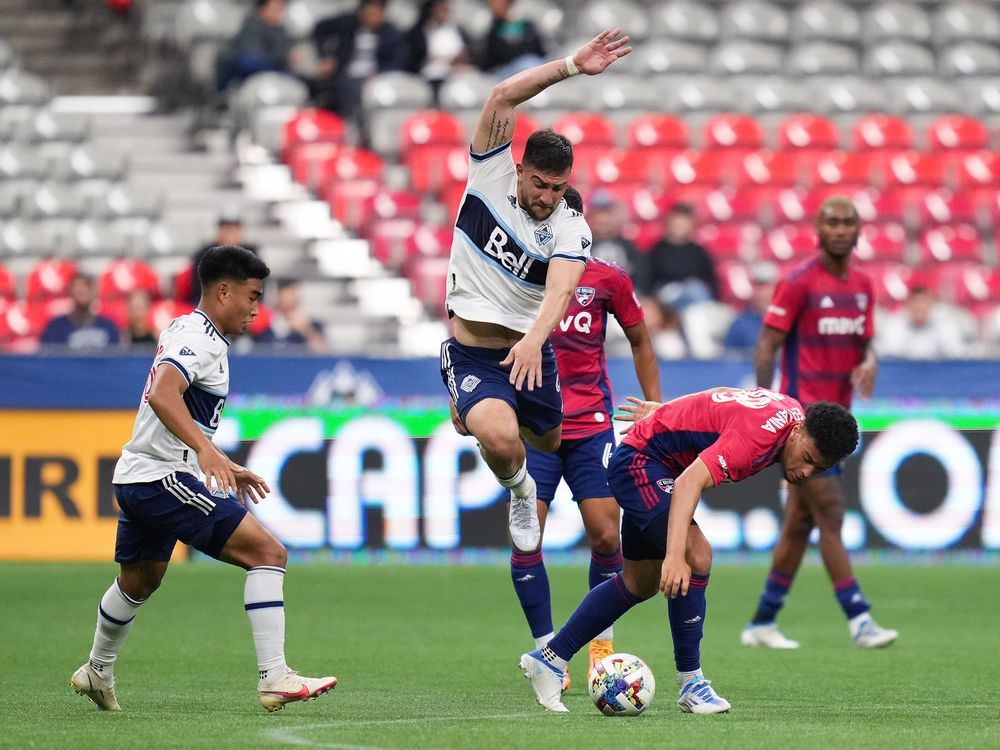 The Vancouver Whitecaps turned the pressure up, and slow-cooked FC Dallas.

After an uninspired first half, the Whitecaps dominated the second 45, scoring twice, and finished their four-game home stand undefeated after a 2-1 win over the Toros at B.C. Place on Wednesday.

Lucas Cavallini’s injury-time penalty kick put the Caps over the top, as they took down the second-place team in the Western Conference.

Brian White also scored for the Whitecaps (3-6-2), while Paul Arriola, with his third goal in three games, scored for Dallas (6-2-4).

57: The amount of possession Dallas finished the game with. The Caps, who have the lowest average in the league, had less than 40 per cent at the half.

12-8: Shots advantage for the Toros. The Caps, who average the fewest shots on goal in MLS, had three, as did Dallas.

1: The number of yellow cards handed out to Cavallini, who is now suspended on his next caution. He avoided one against San Jose, but a late challenge by Ema Twumasi got under his skin and he was booked for dissent — 20 seconds before the final whistle.

The Whitecaps have yet to score a first-half goal at home this season, and it looked grim when Arriola’s 48th minute gut-punch put the visitors up. Coming into the game, the Caps were 0-4 when the opponent scores first, and 0-5 when trailing at the half.

Needing an offensive infusion, Sartini took off the lively-legged Ryan Raposo for White at the 59-minute mark; 12 minutes later, he scored.

Cristian Gutierrez put a perfect cross to the corner of the six-yard box, and White gained separation from Nkosi Tafari and headed home his second of the season. Vancouver took the game to the Toros from there, with Cristian Dajome skimming the outside of the post after a White run and cross unsettled the Dallas back line.

DAMNED IF YOU DO

The Caps’ three-man backline was a revelation last season. Then Sporting KC wrote the book on how to beat it, and the whole league took notice.

Sartini switched things up to a four-man back line, and went 2-0 without conceding a goal, then changed it at halftime against San Jose and gave up three.

Vancouver went back to a three-man crew against Dallas, and it was the Toros who struck first — and in painfully familiar fashion.

With six defenders clustered around two Dallas players, Arriola streaked down the right flank, unmarked and unbothered, and punched home a pass from Jesús Ferreira through Cody Cropper’s legs in first-half injury time. The wingback on that side, Cristian Gutierrez, wasn’t even in frame on TV during the run or the goal.

The goal came a few minutes after a similar lapse left Jáder Obrian unmarked in the box on a cross, but Cropper came up big on that chance.

One never wants to concede a goal, but some goals are more aggravating than others — especially when you talk about the situations ahead of time.

“We need to be better in transition. We need to … manage a little better this moment,” Sartini said on Tuesday, referring to the San Jose game, where the Quakes scored three times in the second half.

“We need to drop more with the backline, not engage, and we need to be faster with the guys that are wingbacks to be back and help the back line. We actually worked on it a little bit yesterday and today, so hopefully we’re going to do better tomorrow.”

There’s no time for family for the Caps, who are back at it on Sunday in Charlotte to take on the expansion side that’s currently ninth in the East.

It will be the fifth game for Vancouver since May 8, and there’s no rest after it, either. It’s a trip to Calgary for the Canadian Championship matchup with Cavalry FC on Wednesday, then back on another plane for a trip to KC to take on Sporting.