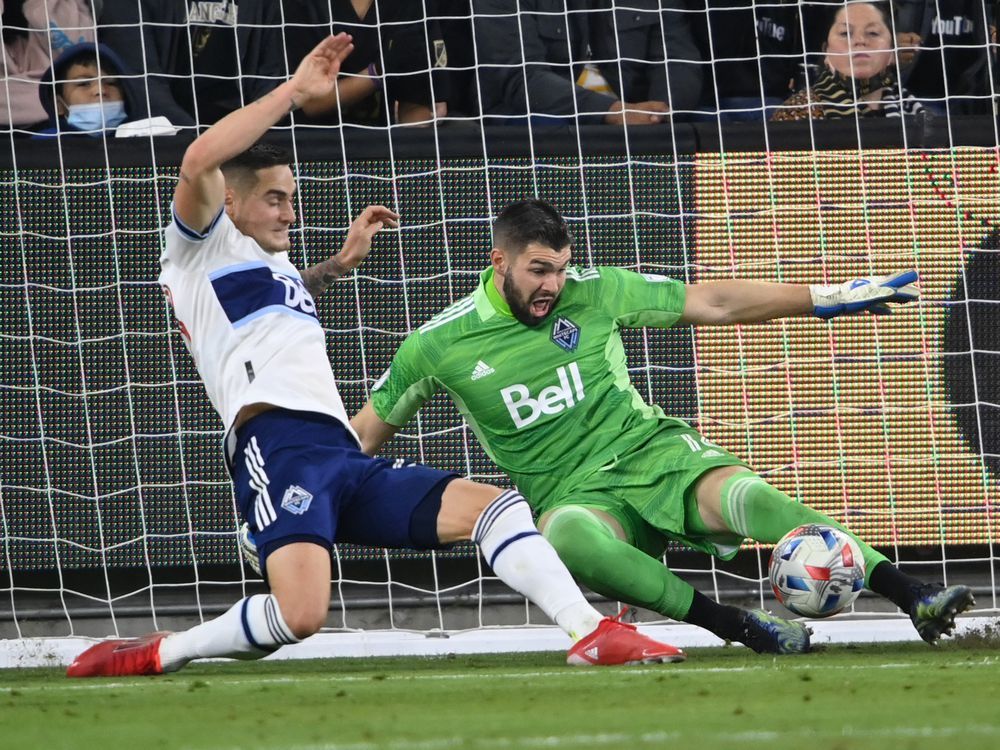 That’s the company line trotted out by most when players and coaches face their former teams, and most of the Vancouver Whitecaps and LAFC members stuck to the script ahead of Sunday’s game at Banc of California Stadium.

L.A.’s Max Crepeau, former Caps keeper: “There’s a mutual respect there. … They know me, I know them … on the field, nothing changes for me. It’s business as usual.”

L.A.’s Doneil Henry, former Caps centreback: “It’s just like any other game; play the game and not the occasion.”

Vancouver’s Jake Nerwinski, on facing Crepeau, Henry and former coach Marc Dos Santos: “It’s just another game for us. We can’t kind of hype it up … too much. Because then emotions get involved, and that can get the best of people. So we’re going into a game playing LAFC. Whoever’s on that team, whatever. We want to get three points, so it doesn’t matter.”

Vancouver centreback Tristan Blackmon, traded by LAFC to the Caps in the off-season: He’s already covered it a couple times this week.

That’s the standard, public response. But away from the media and their microphones, the trash talk is flying, the gauntlets tossed down.

“They will be motivated to try to win that game and really, really try to push me a little bit as well,” a smiling Crepeau conceded. “I have received a little bit of a text message from all (my old) teammates. ‘Hey Max, are you ready? Blah, blah, blah. You know, a little bit of trash talking before the game, which is just perfect. We love it.

“But we’re focusing on our football, and that’s it,” he added, turning back to the script.

Crepeau was The Man in B.C., before his off-season trade request turned him into Camilo 2.0 in the eyes of many Whitecaps fans, regardless of the reason he left.

Dos Santos, an assistant coach with LAFC, declined all interviews heading up to the game, but he’ll be keen to help lay a loss on his old club. Sporting director and CEO Axel Schuster might have been the one to drop the axe on him after the Caps’ Canadian Championship loss to Pacific FC last season, but it was an irate and embarrassed ownership who had demanded his head.

Henry departed for a Korean club two seasons ago after two years in Vancouver, taking the chance to earn a higher salary and explore the world, but was signed in L.A. at the start of February, a week after Dos Santos was announced as part of Steve Cherundolo’s coaching staff.

Vanni Sartini was hired by Dos Santos to be an assistant in November 2018, and ended up outlasting his former boss with the club. Now he’s the one sitting in MDS’s old chair, and getting the upgraded head coach’s suite on road trips.

And for the amiable Italian, it’s just another game as well, but that doesn’t mean it’s without importance.

“That’s the beauty of this job. Basically, every time that we play against someone, there’s someone that I know or a friend or something. So it’s a good thing,” he said, laughing.

“You want to be the best of yourself in front of your friends. So we have Max, we have Doneil in the other team, we have Marc on the bench on the other team, so it’s gonna be fantastic to see them and but it’s going to be even better if we can beat them.”

LAFC are the West’s clubhouse leaders heading into this weekend’s actions, while the Whitecaps are on the other pole, sitting in last place behind San Jose.

It has all the hallmarks of a colossal mismatch, but it should be noted Vancouver was undefeated against LAFC in 2021, going 1-0-2. The Caps haven’t won in L.A. in six trips to the Banc, and the memories of blowouts (6-1, 2019; 6-0, 2020) are painful and recent, but Vancouver has scored their last four visits.

For the Whitecaps to play David and sling themselves to their first win of the season, it’s a matter of figuring out what they’re missing this year, that they did so well in the second half of last year.

“Obviously, this is not the ideal start to the season that we wanted,” said Nerwinski. “We still have all the same pieces that we had last year and I think we have the same mentality and the way we play. We just need to execute better.

“I think it’s just a matter of time before things start to click. We hope it’s sooner rather than later, and it would be a great time to have that start on Sunday. It would be a huge win for us and huge time to get points.

“We’re only a few games in. I don’t think it’s panic mode yet. Certainly, if we want to get points on the board and in the standings so there is a time where it’s gonna be time to get some points. And I think Sunday is an unbelievable opportunity to go to the best team in the league, into their home, and get either a point or three points out of it.”

NOTES: Brian White, Erik Godoy and Caio Alexandre have all been ruled out for Sunday’s game. Ryan Gauld did not practice Friday, spending training on the stationary bikes in the gym overlooking the practice field, and may not play. Sartini indicated he picked up an injury in the game against Houston, and they were being cautious in how they treated it. … LAFC announced Friday they had transferred centreback Kim Moon-Hwan to Jeonbuk Hyundai of Korea’s K-League. The 26-year-old played a single season for L.A., scoring one goal and adding two assists in 28 appearances, but wanted a move closer to family and to increase his visibility for a potential selection in South Korea’s World Cup roster.