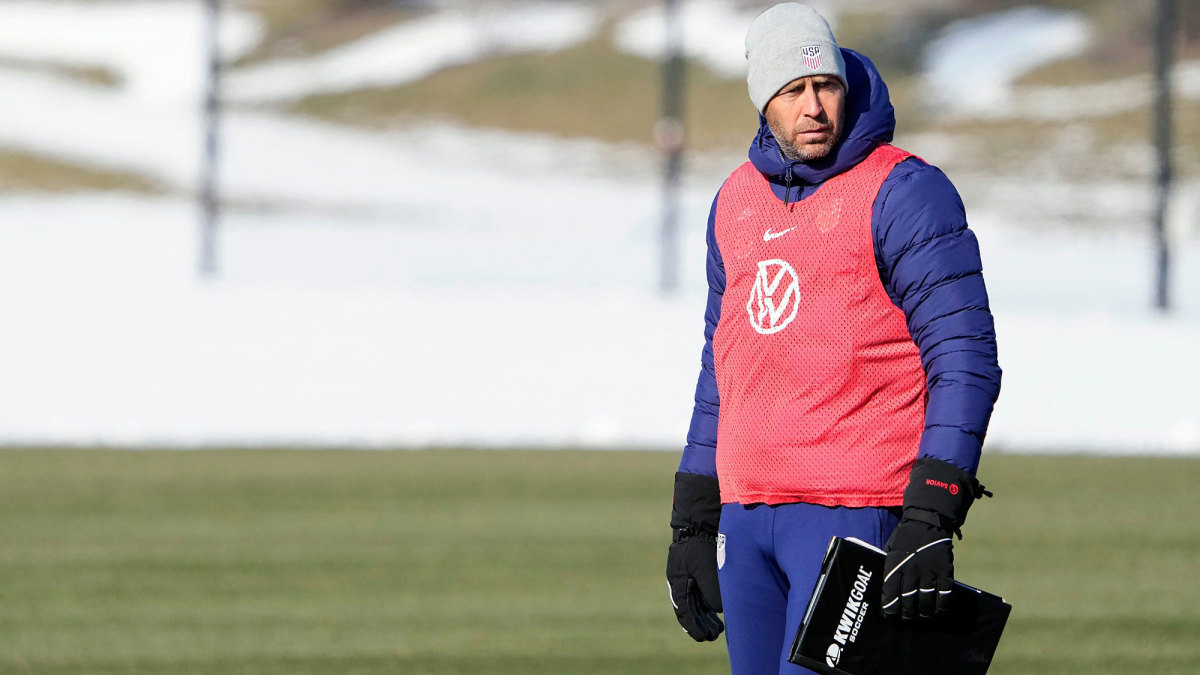 MINNEAPOLIS, Minn. — Maybe it’s naive or maybe it’s prophetic, but either way, this is how U.S. Soccer coaches and staff envision Monday night in the Twin Cities: An eight-hour flight arrives from Honduras, via Houston, at around 9 p.m. Off shuffles the beleaguered Honduran national team, which became the first side to be mathematically eliminated from Concacaf’s World Cup qualifying competition after Sunday’s home loss to El Salvador. It’s been dark for hours, and the wind chill is under 20 degrees. It was in the 70s back home.

The Octagonal has been a disaster for Los Catrachos. They’re winless through 10 games. The coach, veteran Colombian manager Hernán Darío Gómez, said Sunday that “everyone’s patience is gone, [and we’re] at a stage where this job is unpleasant,” according to CBS. A blast of arctic air hits them as they exit the terminal to board their bus. They don’t want to be here.

Wednesday evening’s qualifier between Honduras and the U.S. men at Minnesota United’s Allianz Field is going to be cold. On Monday, the forecast predicted a brutal wind chill of -11 degrees during the second half. While snow is unlikely, it still seems like folly to attempt anything in those punishing conditions, much less play a meaningful pro soccer game. U.S. Soccer chose this place on purpose after weighing variables that included the distance from Sunday’s venue in Hamilton, Ontario, as well as who would be buying tickets, the facilities and field conditions, and more. They know it’s going to be uncomfortable. But like creatives who suffer for their art, coach Gregg Berhalter and his players seem eager, or at least willing, to suffer for whatever advantage they’ll have secured when Honduras steps on that field. A place in the World Cup is worth it.

“It’s mind over matter,” said Berhalter, who claimed last week to have worn short sleeves in subzero temperatures while playing in Germany. “Once you get running, once you get sweating, I think you’re good to go. And for us, just like all the times we go down to Central America and we’re playing in the humidity and the heat and sometimes the smog and the altitude at times, this is an opportunity for us to gain an advantage on our opponents.

“It’s going to be really difficult for them to deal with these conditions,” he added while speaking before last week’s win over El Salvador in chilly, but not as chilly, Columbus, Ohio. “They’re going to take a couple breaths in and it’s going to hit them like they’ve never been hit before. And our guys, who have been playing in Europe in cooler temperatures … we’ll be ready to go.”

Wednesday’s game may be redundant torture for the visitors, but it’s massive for the Americans (5-2-3). Sunday’s setback in Canada leaves them in second place (tied with Mexico on points but ahead on goal difference) in Concacaf’s eight-team World Cup qualifying competition, which will send the top three finishers to the finals in Qatar and a fourth team to a one-game intercontinental playoff. Berhalter & Co. are just one point above fourth-place Panama and have difficult trips to Mexico and Costa Rica scheduled for March. The U.S. has almost no margin for error. It has to defeat Honduras.

Maybe Honduras is already beaten. Maybe the chill will help finish it off before kickoff. But the concern among U.S. Soccer’s critics is that the weather will punish both teams equally—that no conditioning or acclimatization or Jedi mind trick will save you from subzero temperatures, stiff limbs or frostbite. The U.S. is the better team. But the cold could level the playing field, even one that’s heated from below.

“There’s really no way of getting around how cold you’re going to be,” said winger Brenden Aaronson, who’s spent his pro career in Philadelphia and Salzburg. “I think just kind of coming to terms with it and having little things you can do, like getting hand warmers or maybe wearing double socks … but there’s no real way of getting past that. It’s just you got to get warm as fast you can on the field, and then all of the adrenaline starts to kick in and then you’re ready to go.”

The decision to play in Columbus and St. Paul was less about pursuing the cold for its own sake and more a response to Canada’s selection of Hamilton. When it appeared last fall that Canada might go with Vancouver for its match against the U.S., the USSF was ready to play its two home games in San Jose, Calif., and Portland, where conditions are significantly more mild.

But Berhalter is a big believer in reducing travel time, and he didn’t want to fly his players to and from the West Coast if he didn’t have to. That also was a factor in deciding not to play this week in Texas or Florida. Austin FC’s Q2 Stadium, where the U.S. beat Jamaica in October, was under discussion as a standby venue for Wednesday’s match in case of emergency, like an incoming blizzard. But after another look at the forecast and a discussion with Berhalter and chief medical officer George Chiampas, U.S. Soccer decided last week that Allianz would be ready.

Venue decisions are made with the input of multiple U.S. Soccer executives and departments. Berhalter and the technical people have the most influence, but commercial considerations, logistics and marketing play a role as well. At one point, for example, the federation considered returning to Columbus on Sunday and then playing Honduras there. But that would’ve been the third Octagonal match at Lower.com Field, and, despite the Americans’ comfort in central Ohio, that seemed like overkill. St. Paul is relatively nearby. Florida is much farther away and already was earmarked for the home game against Panama in March (it’ll be played at Orlando City’s Exploria Stadium).

Ticket sales also were a concern. Berhalter is firmly behind the federation’s effort to engineer pro-U.S. crowds. Playing Central American opponents along I-95, for example, is risker than playing them in the Midwest. Playing at an NFL stadium in a warmer city like Nashville or Charlotte makes it a lot harder to control who buys tickets. That was also a factor. Some may say that marketing shouldn’t influence soccer decisions like these, but Berhalter has argued that crowd composition can impact the result.

“Some of the criteria we’re looking for is minimizing travel and [a] pro-U.S. crowd,” Berhalter explained in December. “You know El Salvador in D.C. is really tough. You can’t play there. It would be a home game for El Salvador if you do that. Honduras, very similar. Eastern seaboard, New York, similar for Honduras and El Salvador. As you get towards warmer weather, potentially in Florida, you’re still running that risk of the crowd. We want a pro-U.S. crowd. You have seen what a pro-U.S. crowd does for the boys, does for the atmosphere. So now we start having to weigh the risk of that, of the weather—extreme weather.”

They’re willing to take that risk. From heated blankets and jackets and infrared heaters near the Allianz Field benches, to hot drinks, chicken broth, cold-weather gear and constant monitoring my medical personnel, the federation believes the conditions can be managed and endured. Skin coverage will be stressed to the players on Wednesday. Fans will be provided hand warmers, and there will be several teams of first-aid workers roaming the stands, U.S. Soccer said. About 1,000 tickets remained as of Monday night.

The idea was to find some kind of balance between the weather, the travel and the crowd while picking a venue that would be harder on the opponent than the host. The result of that process is counterintuitive on several levels, and there’s been reasonable disagreement and criticism. During the NHL’s Winter Classic on New Year’s Day, TNT displayed a list of the eight coldest pro sporting events ever staged in North America, and four of the top seven took place in the Twin Cities. Wednesday’s temperature won’t be a surprise.

But it’s not a decision that Berhalter or U.S. Soccer took lightly, and it’s one that ultimately will be evaluated by how players and fans handle the bitter cold and what the scoreboard reads at the final whistle. The Americans have had trouble scoring goals in the Octagonal, and the attack has really dried up recently. The U.S. has found the net just twice in the past three qualifiers. It finished off just one of the numerous chances created against the Salvadorans in Columbus, and then it was unable to create much of anything against the dogged Canadians in Hamilton. Almost nothing flows in the cold. It’s tough to imagine a dormant American attack coming to life in that weather. But maybe Honduras will suffer and struggle even more. Perhaps the conditions will inspire.

Two of U.S. Soccer’s most memorable men’s matches were played in the cold. It was 29 degrees at kickoff for “La Guerra Fria,” the famous qualifying win over Mexico in early 2001 that launched the “Dos a Cero” tradition and established Columbus as sacred ground. And it was 29 degrees during the March 2013 “Snowclasico,” where the U.S. got its nascent qualifying campaign back on track with a 1–0 win over the distracted Costa Ricans in a blizzard outside Denver.

Those were games “where the weather is playing a key role in that and giving us the upper hand,” Berhalter said.

Embracing all that Concacaf qualifying has to offer has been Berhalter’s mantra since September. Lean into the chaos, the atmosphere and the absurdity. See the crowds, the travel, the fields and the weirdness as a challenge and an opportunity. That’s been a key part of shepherding this historically young team through that crucible and into second place.

“I want it to be freezing. I want it to be cold,” center back Walker Zimmerman said last week. “I want to be a part of something so iconic that I saw and I really remember growing up. And that’s exciting to me. So I think the guys are ready to embrace it, and it will be a really good environment for us fan-wise as well.”

By Wednesday night, we’ll know whether that approach can withstand the Minnesota winter, or whether Berhalter and the federation overthought this decision to American soccer’s historic detriment.