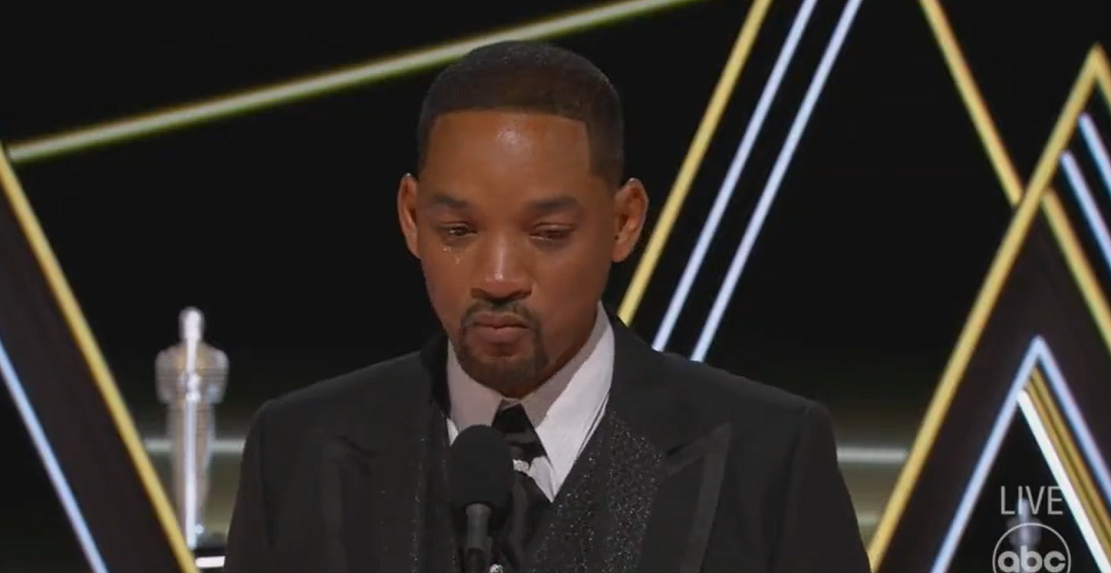 Will Smith secured a Best Actor trophy at Sunday night’s Academy Awards – but it was another onstage moment that everyone is talking about.

Presenting Best Documentary, comedian Chris Rock teased married nominees Javier Bardem and Penelope Cruz before setting his sights on Will Smith and Jada Pinkett Smith. He made a joke about Pinkett Smith (who suffers from alopecia and was sporting a shaved head) starring in G.I. Jane 2. Though Smith was initially seen laughing at the joke, he abruptly strode onstage and slapped Rock.

“Wow. Wow. Will Smith just smacked the shit out of me,” said a visibly stunned Rock.

“Keep my wife’s name out of your f**king mouth,” Smith could be heard shouting back.

“Wow, dude. It was a G.I. Jane joke,” Rock responded, and Smith repeated the warning.

The sound was cut on the ABC feed, but other countries ran the segment unedited.

Here’s the moment Chris Rock made a “G.I. Jane 2” joke about Jada Pinkett Smith, prompting Will Smith to punch him and yell, “Leave my wife’s name out of your f–king mouth.” #Oscars pic.twitter.com/kHTZXI6kuL

VIA JAPANESE TELEVISION: The uncensored exchange between Will Smith and Chris Rock pic.twitter.com/j0Z184ZyXa

Behind the scenes footage showed Denzel Washington and Tyler Perry comforting Smith during the commercial break.

During the commercial break, Will Smith is pulled aside and comforted by Denzel Washington and Tyler Perry, who motion for him to brush it off. Will appears to wipe tears from his eyes as he sits back down with Jada, with Denzel comforting Jada and Will’s rep by his side. pic.twitter.com/uDGVnWrSS2

Minutes later, Smith took the stage again to accept the Best Actor award for his performance as Serena and Venus Williams’ father in King Richard. Visibly emotional, Smith addressed the incident in his speech, saying, “Art imitates life. I look like the crazy father, just like they said about Richard Williams.”

Before leaving the stage, Smith added, “Thank you. I hope the Academy invites me back.”

The reaction on Twitter was immediate, with many viewers commenting that Rock’s joke was in poor taste, and/or shocked by Smith’s response.

Because you don’t assault people for something they say. no matter how much you might want to. Especially when your reaction will ruin the most important moment in other filmmakers’ lives. https://t.co/TrtnhrQ0nM

Please tell me I didn’t see what I just saw. Somebody please tell me that @willsmith was joking and it was part of the show when he just smacked @chrisrock on National Television. I’m begging y’all….please don’t tell me @willsmith would do something like that???

I think you can recognize that this is all entirely his own doing and also find it incredibly sad.

Just saw the Will Smith slap. Anyone have a late night show I can borrow just for tomorrow?

people are going to have so much to say about all that — which will no doubt be exhausting — but watching will smith process and apologize in real time was … astounding. my heart is still pounding #oscars

Jane Campion wins Best Director for THE POWER OF THE DOG, a film that doesn’t speak to toxic masculinity as effectively as the fact that Will Smith is still in the audience after punching Chris Rock in the fucking face #Oscars

Will Smith is not the one nor the Oscars the place

At expect everyone to eat it…

and again not everybody thinks that’s funny .. or funny after all this time

Will Smith has trained in boxing, karate, and hand to hand combat for many movies over his long career. He has a significant weight and height advantage on Rock. He is fit and connected that slap with form.

If he wanted to seriously injure that lil man, he would have. Stop it.

Physical violence is never the answer. Will Smith was wrong. Some jokes are evil. Chris Rock was wrong. They both can be wrong.

While it’s no excuse for violence: We do need to have a serious conversation about how jokes about alopecia (what Will Smith’s wife Jada Pinkett Smith has) and people’s medical conditions, are not fair. This nonsense needs to stop. It’s actually quite gross. #Oscars

Sorry to say I do not remember a single winner because of that Will moment, my GOD

And That’s How We Do It