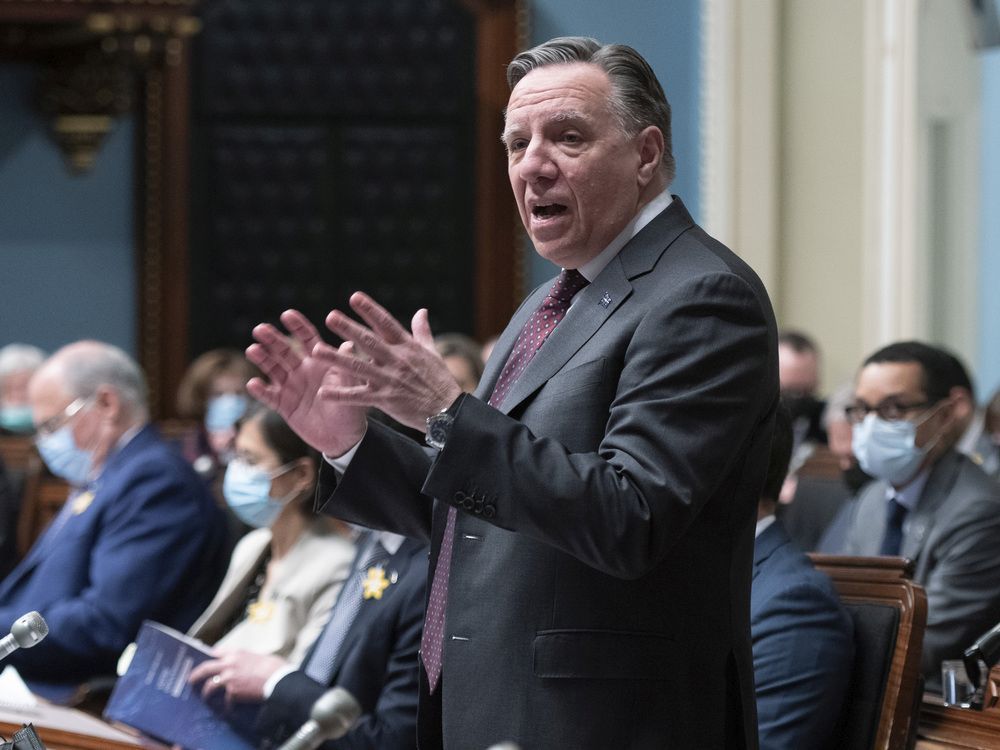 QUEBEC — Premier François Legault said Wednesday he knows many, many English-speaking Quebecers who completely support the Charter of the French Language, even if the current overhaul in the form of Bill 96 goes much further than the old law.

But in what will stand as his swan song one-on-one debate with Legault, Liberal MNA David Birnbaum, the party point person for the English community, ripped Legault for repeatedly dodging his questions about the English-community’s estrangement from the Coalition Avenir Québec government.

What Birnbaum found particularly irksome was Legault’s repeated accusations that the only reason the Liberals plan to vote against Bill 96 overhauling the charter on final reading is because they fear the arrival of two new minority parties will erode their base.

“I know plenty of English-speaking Quebecers who have no problem with Bill 101,” Legault said toward the close of heated 90-minute debate with Birnbaum and other opposition politicians during the annual study of the budgetary items dedicated to the anglophone community.

“It’s been a long time that they have accepted the principle that there’s only one official language (French), that new arrivals must be integrated into the francophone community and who also agree with the values of secularism and the ban on religious symbols (in Bill 21).”

Birnbaum, however, gave no quarter, refuting Legault’s line that the Liberals are soft on protecting French. He noted many, many experts have questioned the legislation including the CAQ government’s pre-emptive use of the Constitution’s notwithstanding clause to protect all of Bill 96 from court challenges.

“We are talking about no small matters here such as the rule of law, which the premier of all Quebecers is obliged to respect,” Birnbaum fired across the floor.

“Our party will vote against this bill with the pride of a party defending a modern Quebec, which takes its responsibility of ensuring French flourishes in a non-divisive, inclusive way. We will vote no not in a defensive way, not for petty electoral reasons which the premier dares spout.

“It will be for principle and we will vote with our heads held high.”

The comment reflected the tone of the debate, which got off to a rocky start when Birnbaum challenged Legault’s use of the term historic anglophones to define the community. The term refers to anglophones who are eligible for English schooling.

Birnbaum, who has already announced he will not seek re-election in the fall, said defining services using the term will deprive thousands of English-speaking Quebecers needed health and social services and asked Legault if it is now government policy to base investments in future English services on the criteria.

Legault said it was not, pointing to investments in English institutions such as McGill and in health. He repeated he does not feel English-speaking immigrants from counties like the United States or Great Britain have the same rights as English-speaking Quebecers.

Legault, who also was under attack by Parti Québécois language critic Pascal Bérubé, who said Bill 96 does not go far enough because it does not apply Bill 101 to the CEGEP system, said his government has found the right balance in the legislation.

“The 9 per cent loses no rights,” Legault said.

He said if the Liberals had their way, the English CEGEP system would be an open bar for enrolment.

There was one productive exchange when Legault agreed with Birnbaum, who again questioned the government’s dismal minority hiring record. Less than one per cent of public servants are from the English-speaking community.

Legault agreed the number is not high enough and he would like it to be closer to the percentage of the population. He argued the COVID-19 pandemic proved one thing: employees working from home is viable. Since one reason anglophones don’t apply is because they don’t want to live in Quebec City, distance working may make working for the government more attractive.

But Legault was smiling with one revelation made during the exchange. Québec solidaire MNA Ruba Ghazal confirmed her party plans to vote in favour of Bill 96.

Still on the fence is the PQ. When Legault challenged Bérubé to take a stand, Bérubé, who does not like the bill, curtly responded: “We’ll see.”

The final vote on the bill is expected in mid-May.