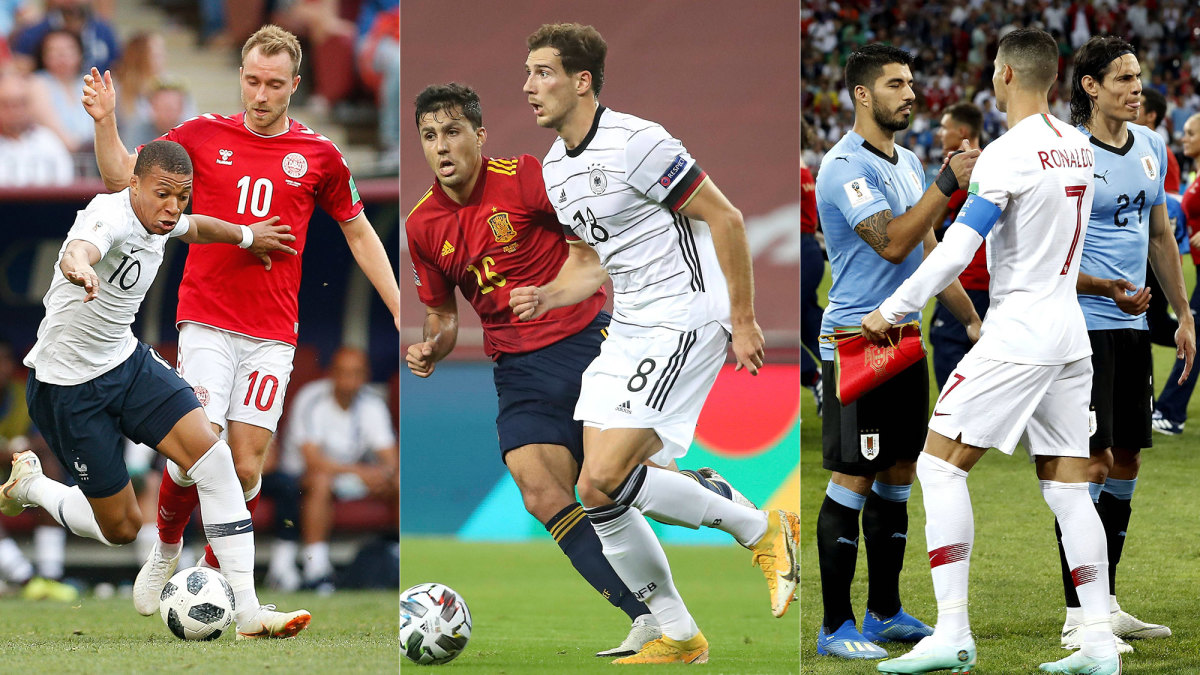 The 2022 World Cup draw has yielded the roadmap for most of what will transpire in Qatar, and it’s also given us all a head start on seeking out what should be the premier events in the opening phase of the competition. Between matches featuring longtime powers and others rich with history and deeper story lines, there are narratives aplenty to sustain the first three weeks of competition—certainly enough to conjure up a list of the matches to anticipate the most over the next seven-plus months.

The one caveat here is that more potential matchups could still happen, depending on the outcomes of the remaining intercontinental and UEFA playoffs in June, which would crack this list. England vs. Wales, for instance, would certainly be one of them. But given what we know, here’s the best of what the group stage will have to offer in Qatar (presented in chronological order):

The opening game of the World Cup won’t feature the host nation, which is a bit of a curveball and surprise, but it does have, on the surface, exceedingly more potential and neutral appeal than a Qatar-Ecuador opener. On one side, there’s the Dutch, revived after missing the 2018 World Cup and playing with a bit of added motivation following the revelation that manager Louis van Gaal has prostate cancer. On the other side, there’s Senegal, the African champion riding the momentum of its Cup of Nations triumph and qualifying playoff triumphs over Egypt (both in penalties). It’s Sadio Mané’s show and a big early test for the Lions of Teranga, who look like the best bet to become Africa’s first team to reach a World Cup semifinal (and fourth to reach a quarterfinal).

Canada’s men’s national team has been waiting 36 years to play in a World Cup, and the first act comes against one of the best teams in the world. John Herdman’s side is predicated on its fearlessness, and there’s no better opportunity to test that out against a team that had been ranked No. 1 in the world from September 2018 until the most recent ranking that determined the World Cup draw pots. Canada will learn plenty about its outlook quite quickly.

There is a sneaky level of firepower that’ll be on the field for this one, which could make for an attacking feast on Thanksgiving Day. Brazil enters the World Cup on the heels of the most successful CONMEBOL World Cup qualifying campaign ever and has all the makings of a side that can end Europe’s 20-year World Cup reign. But first, its defense must show it can tame the likes of Dušan Vlahović, Dušan Tadić, Luka Jović, Aleksandar Mitrović, Sergej Milinković-Savić and the rest of a squad that impressively pipped Portugal to automatic qualification.

Just as was the case ahead of their 2010 matchup in South Africa, this one needs no introduction. U.K. tabloids, naturally, paint this as a walkover, neglecting to remember that England has not beaten the U.S. in their two previous World Cup meetings (0-1-1). England did win the most recent matchup between the two sides, a November ’18 friendly at Wembley Stadium during the Dave Sarachan interim year. Both teams look considerably different now, though Christian Pulisic, Weston McKennie, Tyler Adams and Tim Weah were among the U.S. players to feature in that match. Regardless, fire up the banter, the Ted Lasso references, the Revolutionary War throwbacks and the soccer vs. football linguistic battles for this Black Friday classic.

This was supposed to be a pre-World Cup friendly, but it will instead be one of the gems of the group stage. Argentina eliminated Mexico in 2006 (on Maxi Rodriguez’s extra-time stunner) and in ’10 (with the help of a controversial Carlos Tevez goal) in the round of 16 and is 3-0-0 against El Tri all-time in World Cups. This one is unlikely to have elimination vibes, but then again, if Mexico doesn’t do its part for Poland, it could well be playing for its survival. It hasn’t failed to get out of its group at a World Cup for which it qualified since the 1978 tournament in Argentina. It also takes on added significance for Mexico manager Tata Martino, an Argentine who previously coached La Albiceleste.

The toughest matchup, on paper, for the defending champion comes against the Euro 2020 darling, which has the clout and organization to knock off Les Bleus, whom they held to a scoreless draw in the group stage four years ago. Christian Eriksen’s pending return to the national team for the World Cup adds another layer of intrigue, and given the top-heavy nature of the group, it could factor greatly into which of the two potentially avoids Argentina in the round of 16 (not that that was a problem for France four years ago).

This is the pick of the lot. The 2010 champion vs. the ’14 champion. Two European powers looking to reclaim glory and reinstate their statuses after falling off the perch. And two teams that combine veteran and young talent under their managers to great effect. Hansi Flick has taken over for Jogi Löw to great effect, while Spain’s rebirth under Luis Enrique continues to take form. Spain has won just two World Cup games, period, since winning it all 12 years ago, while Germany crashed out in the group stage in Russia. Both have a point to prove in Qatar.

It’s a 2018 grudge match between two nations with aging talents on (potentially) their last World Cup legs. Uruguay knocked Portugal out of the last World Cup in the round of 16 thanks to a majestic double from Edinson Cavani, with Luis Suárez teeing him up masterfully for the opener on a cross-field give-and-go. The veterans set sights again on delivering a dagger to Cristiano Ronaldo & Co., which could well be playing in its last World Cup with the all-time men’s international scoring leader.

World Cup matchups are usually about way more than individual story lines, but when you’ve got Lionel Messi on one side and Robert Lewandowski on the other, it’s hard to ignore. They’ve combined to win the last two Ballon d’Ors (Lewandowski was second last year) and the last three FIFA Best Men’s Player awards and have long been among the most prolific scorers in the world. Here’s to a high-scoring showdown that showcases both of them.

The battle of the aging golden generations. If the Euros weren’t Belgium’s last chance to win a major title with its current talent core, then the World Cup most certainly is. The same can be said of Croatia, which very nearly lifted the World Cup trophy four years ago after a dream run to the final. Some of its stars have aged out, but Luka Modrić is still hanging on for one more run.

The memories of 2010 are rekindled with this one. Ghana was on the cusp of the semis when Suárez purposefully handled the ball on the goal line to prevent a winner at the end of extra time. Asamoah Gyan missed the subsequent penalty, Uruguay prevailed in a shootout and the rest is history. This won’t determine a semifinalist, but it could well determine which (if either) advances to the knockout stage, given its timing on the last day of group play.